Sustainable Food Security for Local Communities in the Globalized Era: a Comparative Examination of Brazilian and Canadian Case Studies 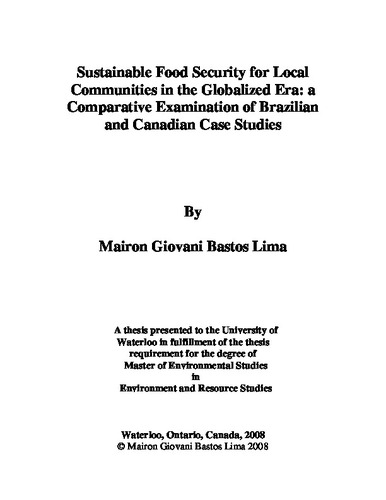 In a world where food production is sufficient to feed everyone, more than 850 million people live in conditions of undernourishment, hunger, or starvation. Much of the problem lies in the current dynamics of the global agri-food system; they have impaired access to food and contributed to environmental damage and social disintegration. This increasingly integrated global system is displacing family farming enterprises in favour of agro-industrial monocultures, with their associated consequences for ecosystem health (biodiversity loss, heavy reliance on fossil fuels, etc.), and in the degradation of traditional food cultures. Conventionally, the term “food insecurity” is used to describe situations of food deprivation. This study, however, adopts a broader perspective on the issue. It has associated the ideas of food security with those related to healthy food systems, suggesting that it is not only important to strive for universal access to adequate food but also to think of the means and processes by which it can be achieved; that is, a food system that promotes equity and environmental sustainability. In addition, food security also emphasizes the need for a healthy and active life unimpaired by overconsumption or inadequate eating habits. Using a systems perspective, this study has devised criteria of sustainable food security, which serve as indicators of health in the food system. These criteria include nutritional and cultural adequacy of food, physical and economic access to it, the setting in which it is offered (i.e. the “food environment”), and the food systems’ social and biophysical impacts. Such criteria were applied to two case studies: first in Canada (Waterloo Region, Ontario) and then in Brazil (Feira de Santana, Bahia), two very different contexts, but both under the influence of global agri-food dynamics. With this case study analysis, this research investigates the current challenges for achieving sustainable food security in local communities, as well as opportunities and benefits that might be available. Feira de Santana exhibits great agro-biodiversity, a very localized food system, and community initiatives to support local food traditions, family agriculture, and sustainable farming practices based on agroecology. These efforts, however, are hindered by poverty, lack of education, poor infrastructure, and little support from the local government. For its part, Waterloo Region counts on a very supportive government that strengthens local food initiatives and combines efforts with non-state organizations in order to promote a healthy food system. Despite possessing notable local food traditions, its food system is much more globalized than Feira de Santana’s. Most of its food is imported, and much of the arable land is used for agro-industrial cash-crops. This has hampered the operations of the smaller local farmers, damaged the environment (due to long transportations and intensive, conventional agriculture), and contributed to poor eating habits. Although Waterloo Region faces less food deprivation than Feira de Santana, it has a much bigger problem with respect to overconsumption and obesity – half of the local population is overweight with associated health concerns. In conclusion, this study stresses the need to consider food security from a systems perspective, taking into account social and environmental factors. Thus, it highlights the need to promote sustainable food systems, and draws some recommendations for achieving it.