Design, Implementation and Control of a Magnetic Levitation Device 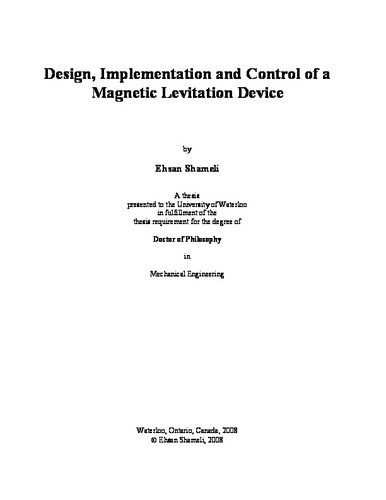 Magnetic levitation technology has shown a great deal of promise for micromanipulation tasks. Due to the lack of mechanical contact, magnetic levitation systems are free of problems caused by friction, wear, sealing and lubrication. These advantages have made magnetic levitation systems a great candidate for clean room applications. In this thesis, a new large gap magnetic levitation system is designed, developed and successfully tested. The system is capable of levitating a 6.5(gr) permanent magnet in 3D space with an air gap of approximately 50(cm) with the traveling range of 20x20x30 cubic millimeters. The overall positioning accuracy of the system is 60 micro meters. With the aid of finite elements method, an optimal geometry for the magnetic stator is proposed. Also, an energy optimization approach is utilized in the design of the electromagnets. In order to facilitate the design of various controllers for the system, a mathematical model of the magnetic force experienced by the levitated object is obtained. The dynamic magnetic force model is determined experimentally using frequency response system identification. The response of the system components including the power amplifiers, and position measurement system are also considered in the development of the force model. The force model is then employed in the controller design for the magnetic levitation device. Through a modular approach, the controller design for the 3D positioning system is started with the controller design for the vertical direction, i.e. z, and then followed by the controller design in the horizontal directions, i.e. x and y. For the vertical direction, several controllers such as PID, feed forward and feedback linearization are designed and their performances are compared. Also a control command conditioning method is introduced as a solution to increase the control performance and the results of the proposed controller are compared with the other designs. Experimental results showed that for the magnetic levitation system, the feedback linearization controller has the shortest settling time and is capable of reducing the positioning error to RMS value of 11.56μm. The force model was also utilized in the design of a model reference adaptive feedback linearization (MRAFL) controller for the z direction. For this case, the levitated object is a small microrobot equipped with a remote controlled gripper weighting approximately 28(gr). Experimental results showed that the MRAFL controller enables the micro-robot to pick up and transport a payload as heavy as 30% of its own weight without a considerable effect on its positioning accuracy. In the presence of the payload, the MRAFL controller resulted in a RMS positioning error of 8μm compared with 27.9μm of the regular feedback linearization controller. For the horizontal position control of the system, a mathematical formula for distributing the electric currents to the multiple electromagnets of the system was proposed and a PID control approach was implemented to control the position of the levitated object in the xy-plane. The control system was experimentally tested in tracking circular and spiral trajectories with overall positioning accuracy of 60μm. Also, a new mathematical approach is presented for the prediction of magnetic field distribution in the horizontal direction. The proposed approach is named the pivot point method and is capable of predicting the two dimensional position of the levitated object in a given vertical plane for an arbitrary current distribution in the electromagnets of the levitation system. Experimental results showed that the proposed method is capable of predicting the location of the levitated object with less than 10% error.