Beer, Tourism and Regional Identity: Relationships between beer and tourism in Yorkshire, England 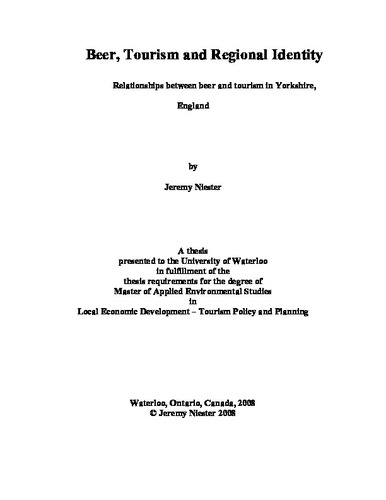 Beer, brewing, and the public house have been celebrated institutions in English culture for centuries. The drink occupies a venerable position in the gastronomy of most regions and is an integral component in the lives of many. There is an emerging literature on culinary tourism as an increasingly important element of cultural tourism. Local cuisine can be used to distinguish unique tourist regions from their competitors in an ever-globalising world. While wine tourism in particular has been studied quite thoroughly in recent years, beer tourism has been largely neglected. The purpose of this study is to explore the current state of, and potential for beer tourism in Yorkshire, England. Beer tourism can be described as “visitations to breweries, beer festivals, and beer shows for which beer tasting and experiencing the attributes of a beer region are the prime motivating factors for visitors” (Plummer et al. 2003). Through the use of a mail survey, short interviews, participant observation and secondary data collection techniques the author explored the extent to which local breweries use beer tourism practices; the specific beer tourism techniques being used by breweries in Yorkshire, and their perceived benefits and limitations; the partnerships, alliances and cooperation that may exist between the brewers themselves, and the tourism and hospitality industries; if and how tourism stakeholders draw upon beer and brewing to promote and market the region to tourists, and the role that brewers may play in this process. The author also made recommendations for brewery managers and regional marketing boards based upon relevant academic literature and the specific findings of this study. The author makes note of numerous findings on participation rates for breweries in tours and beer festivals, the perceived benefits and limitations that beer tourism has for brewers, and research on the branding and marketing of Yorkshire beer. A detailed typology of breweries based upon their relationship and degree of integration with the tourism industry is introduced. Furthermore, a tentative hypothesis based upon a brewer’s rationale for involvement in tourism and the size and success of that brewery is presented. This hypothesis must be empirically tested in future research to determine its acceptability. The author also presented a detailed review of the relevance of wine tourism literature for the field of beer tourism. It was found that although the two forms of beverage tourism share many commonalities, there exist as many differences. This comparison ultimately emphasises the importance of developing a specific beer tourism literature. It is hoped that the findings of this beer-specific research may be used by others with a keen interest in beer and tourism to undertake additional studies in the field. This study solely investigates the links between beer producers and the tourism and hospitality industry in Yorkshire, England. A similar study in an alternative setting would most likely yield interesting results. Furthermore, additional studies on beer and tourism should take the size, brewing output capacity, and possibly the revenue of a brewery into account in order to investigate potential differences between breweries’ tourism strategies based upon their size and success in their market.