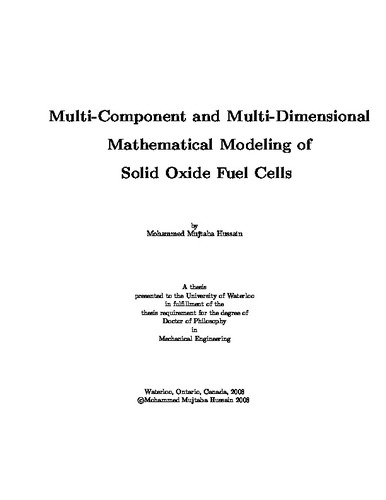 Solid oxide fuel cells (SOFCs) are solid-state ceramic cells, typically operating between 1073 K and 1273 K. Because of high operating temperature, SOFCs are mostly applicable in stationary power generation. Among various configurations in which SOFCs exist, the planar configuration of solid oxide fuel cell (SOFC) has the potential to offer high power density due to shorter current path. Moreover, the planar configuration of SOFC is simple to stack and closely resemble the stacking arrangement of polymer electrolyte membrane (PEM) fuel cells. However, due to high operating temperature, there are problems associated with the development and commercialization of planar SOFCs, such as requirement of high temperature gas seals, internal stresses in cell components, and high material and manufacturing costs. Mathematical modeling is an essential tool for the advancement of SOFC technology. Mathematical models can help in gaining insights on the processes occurring inside the fuel cell, and can also aid in the design and optimization of fuel cells by examining the effect of various operating and design conditions on performance. A multi-component and multi-dimensional mathematical model of SOFCs has been developed in this thesis research. One of the novelties of the present model is its treatment of electrodes. An electrode in the present model is treated as two distinct layers referred to as the backing layer and the reaction zone layer. Reaction zone layers are thin layers in the vicinity of the electrolyte layer where electrochemical reactions occur to produce oxide ions, electrons and water vapor. The other important feature of the present model is its flexibility in fuel choice, which implies not only pure hydrogen but also any reformate composition can be used as a fuel. The modified Stefan-Maxwell equations incorporating Knudsen diffusion are used to model multi-component diffusion in the porous backing and reaction zone layers. The coupled governing equations of species, charge and energy along with the constitutive equations in different layers of the cell are solved for numerical solution using the finite volume method and developed code written in the computer language of C++. In addition, the developed numerical model is validated with various experimental data sets published in the open literature. Moreover, it is verified that the electrode in an SOFC can be treated as two distinct layers referred to as the backing layer and the reaction zone layer. The numerical model not only predicts SOFC performance at different operating and design conditions but also provides insight on the phenomena occurring within the fuel cell. In an anode-supported SOFC, the ohmic overpotential is the single largest contributor to the cell potential loss. Also, the cathode and electrolyte overpotentials are not negligible even though their thicknesses are negligible relative to the anode thickness. Moreover, methane reforming and water-gas shift reactions aid in significantly reducing the anode concentration overpotential in the thick anode of an anode-supported SOFC. A worthwhile comparison of performance between anode-supported and self-supported SOFCs reveals that anode-supported design of SOFCs is the potential design for operating at reduced temperatures. A parametric study has also been carried out to investigate the effect of various key operating and design parameters on the performance of an anode-supported SOFC. Reducing the operating temperature below 1073 K results in a significant drop in the performance of an anode-supported SOFC; hence ionic conductivity of the ion-conducting particles in the reaction zone layers and electrolyte needs to be enhanced to operate anode-supported SOFCs below 1073 K. Further, increasing the anode reaction zone layer beyond certain thickness has no significant effect on the performance of an anode-supported SOFC. Moreover, there is a spatial limitation to the transport of oxide ions in the reaction zone layer, thereby reflecting the influence of reaction zone thickness on cell performance.