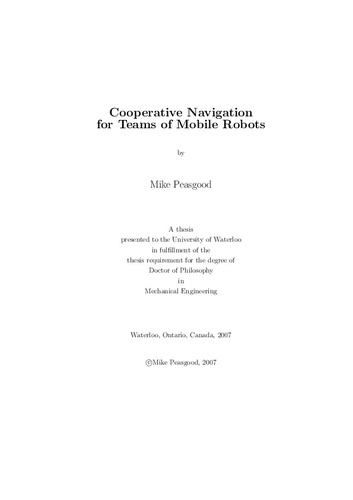 Teams of mobile robots have numerous applications, such as space exploration, underground mining, warehousing, and building security. Multi-robot teams can provide a number of practical benefits in such applications, including simultaneous presence in multiple locations, improved system performance, and greater robustness and redundancy compared to individual robots. This thesis addresses three aspects of coordination and navigation for teams of mobile robots: localization, the estimation of the position of each robot in the environment; motion planning, the process of finding collision-free trajectories through the environment; and task allocation, the selection of appropriate goals to be assigned to each robot. Each of these topics are investigated in the context of many robots working in a common environment. A particle-filter based system for cooperative global localization is presented. The system combines the sensor data from three robots, including measurements of the distances between robots, to cooperatively estimate the global position of each robot in the environment. The method is developed for a single triad of robots, then extended to larger groups of robots. The algorithm is demonstrated in a simulation of robots equipped with only simple range sensors, and is shown to successfully achieve global localization of robots that are unable to localize using only their own local sensor data. Motion planning is investigated for large teams of robots operating in tunnel and corridor environments, where coordinated planning is often required to avoid collision or deadlock conditions. A complete and scalable motion planning algorithm is presented and evaluated in simulation with up to 150 robots. In contrast to popular decoupled approaches to motion planning (which cannot guarantee a solution), this algorithm uses a multi-phase approach to create and maintain obstacle-free paths through a graph representation of the environment. The resulting plan is a set of collision-free trajectories, guaranteeing that every robot will reach its goal. The problem of task allocation is considered in the same type of tunnel and corridor environments, where tasks are defined as locations in the environment that must be visited by one of the robots in the team. To find efficient solutions to the task allocation problem, an optimization approach is used to generate potential task assignments, and select the best solution. The multi-phase motion planner is applied within this system as an efficient method of evaluating potential task assignments for many robots in a large environment. The algorithm is evaluated in simulations with up to 20 robots in a map of large underground mine. A real-world implementation of 3 physical robots was used to demonstrate the implementation of the multi-phase motion planning and task allocation systems. A centralized motion planning and task allocation system was developed, incorporating localization and time-dependent trajectory tracking on the robot processors, enabling cooperative navigation in a shared hallway environment.