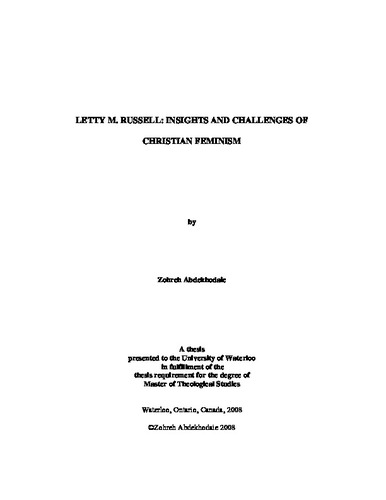 This study offers a critical assessment of Letty Mandeville Russell’s contributions to feminist theology with a view to gleaning wisdom for Muslim women who also wrestle with the issue of justice for women. As a liberation theologian, Russell’s definition and construction of feminist theology is based on two elements: commitment to Christianity and strong advocacy of feminism. Russell believes that in human communities, marginalized people, particularly women, are kept down and disempowered in society, history, and the church. Russell recognizes tradition as the key challenge for feminists and she struggles with “all oppressive expressions of Christian tradition.” She notes the androcentric and sexist elements of the Bible, but she refuses to leave the church. Rather, her attempt is to proclaim the “prophetic- messianic” message of the gospel while advocating a critical approach to the biblical text. Thus this thesis will explore the question: Is it possible to reconstruct a theology in a systematic way that is faithful to religious convictions while advocating feminism. In addition to Russell’s books and articles, which form the primary sources for this study, two other Christian feminists (Fiorenza and Harder) will be drawn into the discussion in order to further illuminate the various building blocks that women use to link faith and feminism. Chapter one provides a background for the feminist movement and introduces feminist theology, in order to position Russell within the wide spectrum of feminist theologians who attempt to reconcile their Christian faith and their convictions and vision for women. Chapter two looks Russell’s claim that she is both Christian and feminist. Russell’s definition of feminism, faith, and their inter-relationship will be illuminated as a key to her identity as a feminist theologian. The chapter shows not only how Russell understands these two commitments, often understood as contradictory, but also shows how Russell’s roots in liberation theology have aided her in building a bridge between faith and feminism. Chapter three deals with the methodology that Russell uses to build a bridge between faith and feminism. She proposes a process of action-reflection in which women gain a new understanding of faith and add new perspectives to Christian theology. Chapter four analyzes Russell’s contributions in dealing creatively and faithfully with tradition while being both a Christian and a feminist. She proposes a paradigm shift for the community that does theology; a shift from a paradigm of domination to a paradigm of partnership. She believes that through this shift, all marginalized people, including women, can find their own voices and thus be included in the promises of God to his people. The concluding chapter, chapter five, offers a grandstand view of all of the building blocks that Russell uses to construct a bridge between faith and feminism, thus making apparent how it is possible to advocate feminism and also be committed to Christianity. At the same time, this chapter will also consider whether the same building blocks can be used to build the same kind of bridge for Muslim women.