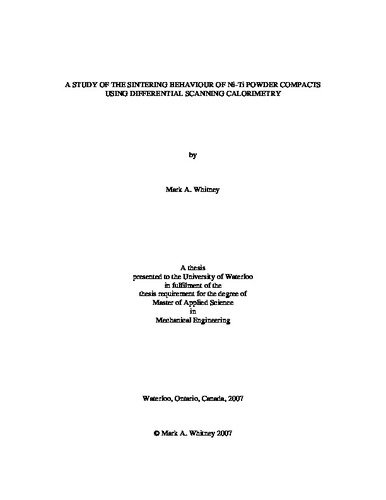 A primary purpose of the present work was to develop an experimental technique using Differential Scanning Calorimetry (DSC) capable of elucidating phase formation during sintering of a 50 atomic percent Ni and 50 atomic percent Ti powder compact in order to increase the understanding of the sintering mechanisms that take place during solid state and reactive sintering. Using a variety of Nickel and Titanium powder sizes, effects due to powder size, peak temperature and hold time were studied in situ using DSC, which allowed for a number of qualitative and quantitative relationships to be developed. In studying the eutectoid decomposition of β-Ti using DSC, a simple model was developed (Eq. 4-7) to relate the measured enthalpy of this reaction to the area fraction observed microstructurally. This allowed for the determination of the standard enthalpy for the β-Ti eutectoid decomposition, which was found to be ΔHf = 64.8 J/g. This value, coupled with the measured eutectoid enthalpy, allowed for the determination of the weight fraction of β-Ti present as a function of hold time at 900°C. It was found that the β-Ti removal followed a two-stage parabolic decay. The rate constant for stage I was found to be kI = -0.0347 fβ/(mins)^1/2 and that for stage II, kII = - 0.0123 fβ/(mins)^1/2. A relationship between the enthalpy observed for the combustion reaction versus the fraction of β-Ti present at the time of combustion was also developed (Eq. 4-15). This represents the first published evidence that combustion actually depends on the β-Ti content, which in turn precipitates a melting event significant enough to initiate combustion.