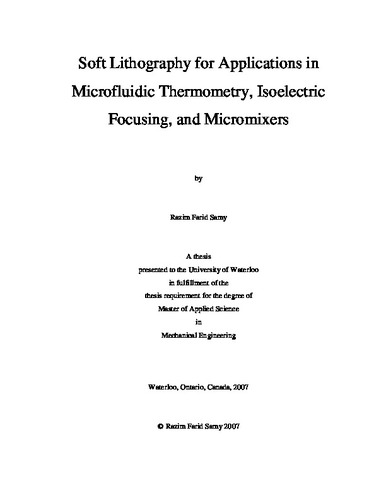 Microfluidics is gaining in importance due to its wide ranging benefits and applicability in chemical and biological analysis. Although traditional microfluidic devices are created with glass or silicon based fabrication technologies, polymer based devices are gaining in popularity. Soft lithography and replica molding are techniques for the rapid prototyping of such devices, utilizing Polydimethylsiloxane (PDMS) as the dominant material. Other benefits include its low costs and ease of fabrication. Even though soft lithography is a well researched and developed fabrication process, new applications have been discovered in which the technology can be applied. Often, changes in the fabrication process are necessary for their application in other areas of research. This thesis will address several microfluidic applications using soft lithography. These areas of research include microfluidic thermometry, isoelectric focusing (IEF), and micromixers. In microfluidic thermometry, a novel thin film PDMS/Rhodamine B has been developed allowing whole-chip temperature measurements. In addition, compatibility problems between Rhodamine B and PDMS microfluidic devices were resolved. The thin film fabrication process, experimental results, and issues with its use are discussed. Future work and attempts at improving the thin film performance are also provided. IEF involves applications in which samples are separated according to its electrostatic charge. Two types of IEF applications are shown in which soft lithography has been shown to be beneficial to its development and performance. In isoelectric focusing with the use of thermally generated pH gradients, soft lithography allows for the rapid design, production and testing of different channel layouts. In general, due to PDMS insulation and overall low heat transfer rates, the temperatures detected are more gradual than those previously reported in literature. IEF using carrier ampholytes are also discussed, with preliminary results in which devices fabricated using soft lithography are compared to commercially available IEF cartridges. Its fabrication issues are discussed in detail. In micromixers, soft lithography fabrication issues and overall integration with flow mechanisms is discussed. In general it is difficult to perform mixing in the microscale due to the predominantly laminar flow and flow rate restrictions. Channel geometry is insignificant, as can be seen through numerical simulations.