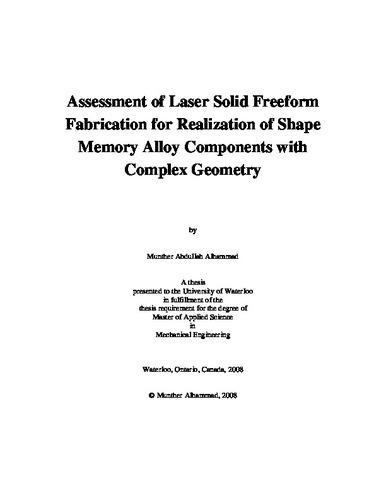 The purpose of the present study was to assess the feasibility of a laser layer manufacturing technique for realization of shape memory alloy (SMA) components with complex geometry. Pre-placed laser solid freeform fabrication (LSFF) was utilized to produce straight and curvaceous SMA parts from a mixture of 55.2 wt%Ni - 44.8 wt%Ti powder. A pulsed Nd:YAG laser was used; while laser pulse width and frequency were held constant at what are considered their optimal values (4 ms and 50 Hz, respectively), laser energy and scanning speeds were varied across samples to determine appropriate values for fabrication of high quality SMA parts . Different pre-placed powder thicknesses were deposited and then mechanically and physically studied. Optical microscopy, SEM, EDS, and XRD methods, as well as microhardness measurements, were used to examine the microstructural characteristics and hardness of the SMA samples. Also, differential scanning calorimetry (DSC) was performed to determine the transformation temperatures of the fabricated parts. The results confirmed the formation of crack-free solid surfaces in which two types of microstructure exist: solid (non-prose) and dendrite arms. EDS chemical composition analysis confirmed the absence of any impurity or oxidise in the cross section of the samples as well as the presence of only nickel and titanium. XRD spectrum analysis indicated the presence of Ni-Ti intermetallic phases, which are almost Ni-Ti but contain a small amount of Ti2Ni. The XRD results also indicated the presence of austenite and martensite phases, which are exchanged during heating or mechanical deformation. The hardness of these samples varied from 250 to 450 HV0.3. Several tests were carried out to investigate the shape memory effect (SME). It was observed that the fabricated SMAs can recover from the bent condition very quickly (i.e., 1 to 8 seconds) depending on their thickness. In general, the fabricated parts were first bent out of their original shapes then heated, in various ways, above the transformation temperature. To theoretically assess the SME performance of the fabricated SMAs with the proposed geometry two models were developed. The first model was established based upon a lump approach in which the part was exposed to an electrical current. The second model, however, was established based upon a finite element method in which a specific domain at one end of the sample was exposed to a source of heat. It was found that the theoretical outputs from both models were in good agreement with the experimental results.