Some Influences of Tribology in Resistance Spot Welding of Aluminum Alloys 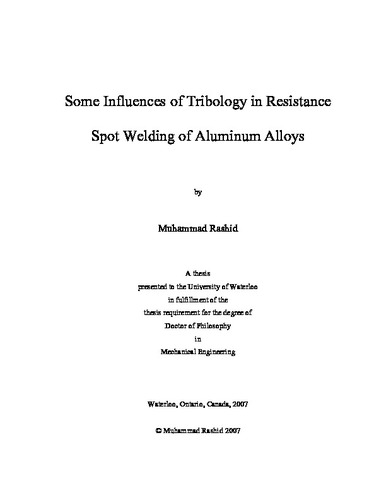 The influence of the tribology during resistance spot welding (RSW) of aluminum alloy 5182 with spherical-tip electrode has been investigated at both the electrode-worksheet (E/W) and faying surface (FS) interfaces. In RSW, electrode life is limited by poor current transport to the FS interface caused by extensive pitting of the electrode tip surface. The primary focus of the present research was to extend electrode life by using the knowledge gained from studying the contact mechanics at both of these interfaces. Series of experiments were conducted and finite element analysis was employed to investigate the contact mechanics at the interfaces. Based on these findings, a practical way to extend the electrode life was developed. In a series of initial experiments, it was found that attempts to alter the worksheet surface roughness caused damage to the surface oxide layer which resulted in decrease of electrical contact resistance at the E/W interface. The oxide layer on the worksheet surface contained aluminum and magnesium oxide regions and abrasion of the worksheet surface reduced the oxide layer thickness and made it more uniform in composition because when the magnesium oxide regions were abraded, a thin layer of aluminum oxide re-formed immediately while it take specific conditions to re-form magnesium oxide. These factors decreased the electrical contact resistance of the E/W interface compared with the as-received surface, thus reducing heat generation and the associated pitting of the electrode surface during RSW. Further experimental investigations and finite element analysis showed that the contact mechanics that occurred during the loaded “squeezing” phase of the welding sequence, but before current was applied to cause RSW, had a significant effect on the electrode pitting behaviour and nugget formation. At the E/W interface, squeezing caused high shear stress and slip at the periphery of the contact region. This slip disrupted the oxide layer and reduced the electrical resistance. At the beginning of the current phase of the weld sequence, the reduced electrical resistance caused current to concentrate near the periphery but constriction resistance still produced enough heat generation to cause alloying, pickup and eventually pitting of electrode in a ring around the contact centre. At the FS interface, experiments and finite element analysis showed that sheet separation and thus bending occurred during the squeezing phase and this had a profound influence on nugget formation. Experimental observations showed that the bending caused enlarged and aligned cracks in the surface oxide layers which promoted good metal-to-metal contact near the periphery of the FS. As at the E/W interface, high current densities occurred at the beginning of the current phase and the constriction resistance caused significant heat generation in this zone due to an increasing constriction resistance. Consequently, the melting at the FS started near the periphery and moved in towards the central zone of the contact region melted to produce a “doughnut-shaped” nugget with a filled-in but thin central region. Low electrical contact resistance at the E/W interface led to longer electrode tip life because less pitting occurred. In addition, higher current densities could then develop at the FS to affect RSW and achieve good nugget formation despite the rather uneven peripheral heat generation. In attempts to reduce the electrical resistance at the E/W interface, several boundary lubricants were placed on the worksheet surface a short time before starting RSW and they altered the tribology. Both increased and decreased electrode degradation rate were found in electrode life tests. One lubricant was found to be particularly effective in lowering the electrode pitting rate. It extended the electrode life to almost double that occurring with as-received (unlubricated) surfaces. Detailed analysis revealed that the effective boundary lubricant had a beneficial chemical influence on the surface of the AA5182 worksheet. The lubricant chemically attacked the oxide layer thus reducing its thickness and reducing electrical contact resistance of the E/W interface at the critical peripheral region. The result was a lower electrode pitting rate and an extended electrode life. The improved understanding of the current flow during the critical initial period and its dependence on the contact mechanics of the E/W and FS interfaces was considered important in developing ways of improving weld strength and increasing electrode life. The finding of a boundary lubricant that acted to reduce oxide layer thickness was considered an important starting point for industrial development of RSW with longer electrode life. It could be employed without interrupting the RSW process and its efficacy was well-supported by the present contact mechanics studies in which the key role of the oxide layer was demonstrated.