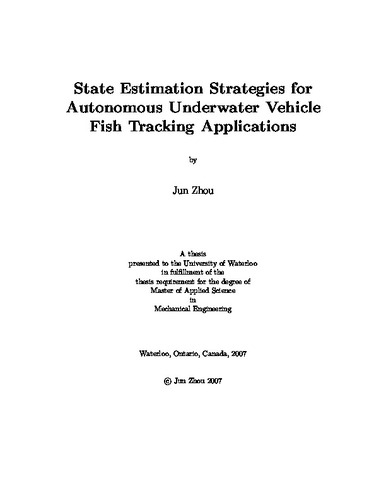 As the largest unexplored area on earth, the underwater world has unlimited at traction to marine scientists. Due to the complexity of the underwater environment and the limitations of human divers, underwater exploration has been facilitated by the use of submarines, Remotely Operated Vehicles (ROVs) and Autonomous Underwater Vehicles (AUVs). In recent years, use of autonomous control systems being integrated with visual sensors has increased substantially, especially in marine applications involving guidance of AUVs. In this work, autonomous fish-tracking via AUV with vision servoing control system is studied with the purpose of assisting marine biologists in gathering detailed information about the behaviors, habits, mobility, and local and global distributions of particular fish species. The main goal of this work in this thesis is to develop an AUV sensing system, including both video and auxiliary sonar, which has the ability to carry out visually guided autonomous tracking of a particular species of fish, Large Mouth Bass. A key in enabling fish-tracking involves the development of a vision-processing algorithm to measure the position of the vehicle relative to the fish. It is challenging because of the complex nature of the underwater environment including dynamic and varied lighting conditions, turbulent water, suspended organic particles and various underwater plants and animals, and the deformable body of fish while swimming. These issues cause target fish identification by computer vision processing extremely difficult. In automated fish-tracking work, we provide two valid and efficient segmentation and recognition vision algorithms to identify a fish from the natural underwater environment: one is a feature extraction algorithm based on Gabor filter texture segmentation and a new approach that we call projection curve recognition. It is able to extract the feature on the fish tail and body and successfully describe the fish as two straight line segments. The second algorithm is SIFT based fish recognition algorithm. The SIFT approach introduced by David Lowe in 1999 extracts distinctive invariant features to scaling, illumination, rotation or translation of the image. The reliable keypoints matching in the database of keypoints from target fish is implemented by Best-Bin-First (BBF) algorithm. Clustering keypoints that agree on the possible object with Hough transform are identified as the object fish, reliable recognition is possible with as few as 3 features. Finally, a dynamic recognition process was designed using continuously updated fish model to match and recognize the target fish from a series of video frames. The SIFT Based recognition algorithm is effective and efficient in identifying Large Mouth Bass in a natural cluttering underwater environment. For a monocular camera system, the depth of field is extremely hard to obtain by vision processing. Hence, the system is augmented with a forward-looking digital image micro sonar. With the sonar image processing algorithm, the target fish is recognized. Sonar can not only provide the relative range between the fish and AUV, but also assist in identifying the target. Finally, the relative position and orientation of the fish in the image plane is estimated using an image processing method, transforming the coordinates between camera, sonar and AUV, and applying the estimation algorithm. The results of o off-line data processing taken from a natural Lake environment shows these computer vision algorithms for identifying fish and state estimation are efficient and successful. The proposed system has potential to enable a vision servo control system of AUV to reliably track a target fish in natural underwater environment.