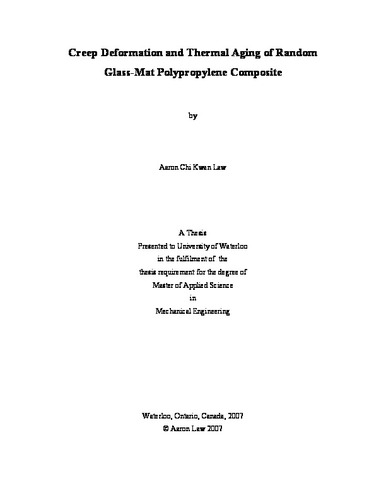 The current research is part of a wider experimental program on creep modeling of glass mat reinforced polypropylene composites which are increasingly being used in molding automotive parts. This specific study is focused on the dimensional and thermal stability of chopped fibre mat and long fibre mat composites. The objective of the study is two-fold. First, to characterize in-situ the micro-failure mechanisms associated with damage accumulation during creep at room temperature and at service temperature (80°C) for stresses up to 67% of the ultimate tensile strength. Second, to characterize the effects of prolonged exposure at elevated temperature on the crystallinity and chemical degradation of the polypropylene matrix. In the first part of the investigation, micro-failure mechanisms including fibre-matrix interface, matrix yielding and cracking during the creep process have been captured in-situ using reflection microscopy. Specimens with 12 mm gauge length were mounted onto a Minimat tensile tester. The applied stress levels of interest were 33% and 67% of the ultimate tensile strength (UTS) at room temperature (RT) and high temperature (HT), respectively. It was found that the deformation mechanisms do not change with temperature but creep in the chopped fibre material is substantially higher than that in the long-fibre. Creep deformation is typically associated with multiple transverse crack initiation at the fibre-matrix interface, crack crazing and rapid coalescence of the small cracks leading to abrupt fracture. Debonding of the fibres is usually detected at the loading stage of the test but fibre breakage is minimal even at high temperature. The change in creep strain at room temperature is similar for both composites but creep strains are highly sensitive to the fibre-mat type at higher temperature. Long-fibre mat structures offer greater creep resistance. Micro-indentations on the matrix-rich regions showed elongation along the loading direction but shear yielding (distortion of indentations) was not noticeable. Using scanning electron microscopy (SEM), the fibre pullout was observed to be pronounced thus suggesting poor adhesion at the fibre-matrix interface. In the second part of this study, the effects of elevated temperature aging on the microstructural changes of isotactic polypropylene matrix in a composite have been studied using wide-angle X-ray scattering (WAXS) and Fourier-transform infrared spectroscopy (FTIR). The objective was to quantify small and slow changes in crystallinity due to thermal aging. To minimize sample variability, polypropylene resin was extracted from the molded composite plaque. Changes in crystallinity level and crystalline form were detected using WAXS after prolonged aging at 90 and 140 °C. FTIR was utilized to monitor in-situ crystallinity changes and to detect oxidation products due to thermal decomposition. The level of crystallinity was monitored by changes in the absorbance ratio of A997/A973 and A841/A973; the former ratio was found to be more sensitive for detecting crystallinity changes. Aging at 140°C resulted in oxidation. The kinetics of secondary crystallization for the aging conditions studied was characterized using Avrami plots.