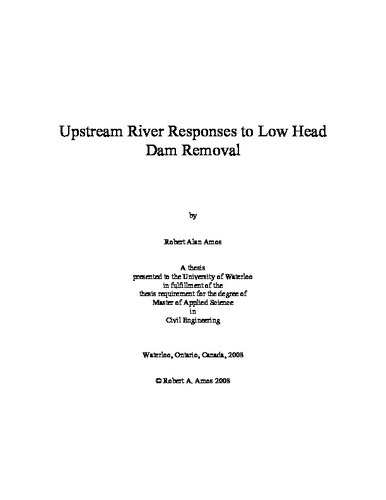 Field and modelling investigations of eight failed or removed dams have been undertaken to examine the upstream effects of low head dam decommissioning on channel morphology. Failed or decommissioned sites were selected such that no upstream interventions or channel mitigation had been applied since the time of decommissioning resulting in a physically-based analog consistent with the passive dam removal restoration approach. Field surveys of the sites, which failed between 2 years and 70 years ago, included longitudinal profiles, cross-sections and bed material pavement sampling on each riffle, run, and headcut. Findings demonstrate that vertical disturbances typically in the form of headcuts frequently extend well beyond the backwater limits of most reservoirs. Although in most cases, critical velocity and shear stress thresholds were exceeded, the localized increases in friction slope where headcuts occurred demonstrated that the velocities associated with larger flows exceeded critical thresholds more often than critical shear stress thresholds. Findings show that if the grain size distributions of the underlying alluvial geologic units are close to that of critical velocity thresholds, when headcuts are initiated (with their resulting increase in friction slope), they can result in continued channel degradation upstream of impoundment regions.