Analytical and Experimental Study of a PV/Thermal Transpired Collector 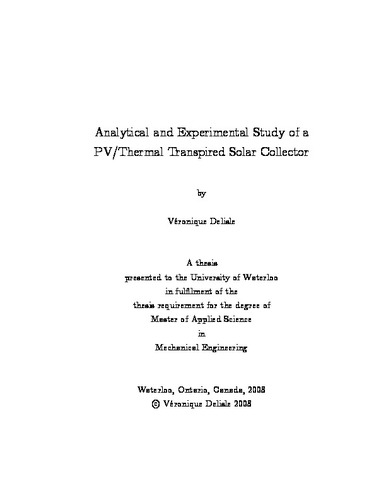 In the last few years, unglazed transpired solar collectors (UTCs) have proven to be an effective and viable method of reducing HVAC loads and building energy consumption. With the growing interest in PV/Thermal collectors, a study of a PV/Thermal UTC with PV cells mounted directly on the absorber was carried out. In the first part of this project, a TRNSYS model was developed to predict the performance of a PV/Thermal UTC. It was based on an actual UTC model, but modifications were made to account for the wind, the presence of PV cells and the corrugated shape of the plate. Simulations showed that mounting the cells only on the top surfaces of the corrugations prevented the cells from being shaded by the collector and consequently, presented the greatest potential. With this configuration, it was found that the addition of PV cells on the UTC decreased the thermal energy savings by 5.9 %, but that 13.6 % of the thermal energy savings could be recovered in the production of electricity. In the second part of the study, a prototype of a PV/Thermal UTC was constructed and tested outdoors. It was found that 10 % more electricity was obtained when the fan was turned on than for zero flow conditions. It was also observed that at greater air suction rates, more cooling of the panel was achieved and potentially higher electrical power could be produced. The effect of the PV cells on the collector thermal performance could not be quantified, however, due to the small portion of PV cells on the whole collector area. TRNSYS simulations were performed using the prototype parameters and the weather data of some experimental days. The results predicted by the component developed showed similar trends as the experimental results. The predictions were, however, not within the experimental uncertainties. The deviation in the results was attributed to the fact that the wind heat losses were not estimated accurately by the model and the non-uniform suction at the panel surface that prevented the prototype tested to work at its optimal performance.