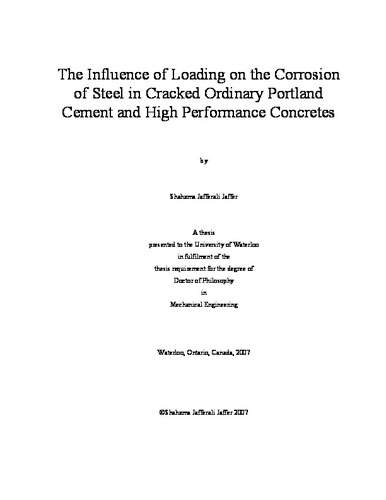 Most studies that have examined chloride-induced corrosion of steel in concrete have focused on sound concrete. However, reinforced concrete is seldom uncracked and very few studies have investigated the influence of cracked concrete on rebar corrosion. Furthermore, the studies that have examined the relationship between cracks and corrosion have focused on unloaded or statically loaded cracks. However, in practice, reinforced concrete structures (e.g. bridges) are often dynamically loaded. Hence, the cracks in such structures open and close which could influence the corrosion of the reinforcing steel. Consequently, the objectives of this project were (i) to examine the effect of different types of loading on the corrosion of reinforcing steel, (ii) the influence of concrete mixture design on the corrosion behaviour and (iii) to provide data that can be used in service-life modelling of cracked reinforced concretes. In this project, cracked reinforced concrete beams made with ordinary Portland cement concrete (OPCC) and high performance concrete (HPC) were subjected to no load, static loading and dynamic loading. They were immersed in salt solution to just above the crack level at their mid-point for two weeks out of every four (wet cycle) and, for the remaining two weeks, were left in ambient laboratory conditions to dry (dry cycle). The wet cycle led to three conditions of exposure for each beam: (i) the non-submerged region, (ii) the sound, submerged region and (ii) the cracked mid-section, which was also immersed in the solution. Linear polarization resistance and galvanostatic pulse techniques were used to monitor the corrosion in the three regions. Potentiodynamic polarization, electrochemical current noise and concrete electrical resistance measurements were also performed. These measurements illustrated that (i) rebar corroded faster at cracks than in sound concrete, (ii) HPC was more protective towards the rebar than OPCC even at cracks and (iii) there was a minor effect of the type of loading on rebar corrosion within the period of the project. These measurements also highlighted the problems associated with corrosion measurements, for example, identifying the actual corroding area and the influence of the length of rebar. The numbers of cracks and crack-widths in each beam were measured after the beam’s initial exposure to salt solution and, again, after the final corrosion measurements. HPC beams had more cracks than the OPCC. Also, final measurements illustrated increased crack-widths in dynamically loaded beams, regardless of the concrete type. The cracks in both statically and dynamically loaded OPCC and HPC beams bifurcated at the rebar level and propagated parallel to the rebar. This project also examined the extent of corrosion on the rebars and the distribution of corrosion products in the concrete and on the concrete walls of the cracks. Corrosion occurred only at cracks in the concrete and was spread over a larger area on the rebars in HPC than those in OPCC. The damage due to corrosion was superficial in HPC and crater-like in OPCC. Regardless of the concrete type, there was a larger distribution of corrosion products on the crack walls of the dynamically loaded beams. Corrosion products diffused into the cement paste and the paste-aggregate interface in OPCC but remained in the crack in HPC. The most voluminous corrosion product identified was ferric hydroxide. Elemental analysis of mill-scale on rebar which was not embedded in concrete or exposed to chlorides was compared to that of the bars that had been embedded in uncontaminated concrete and in cracked concrete exposed to chlorides. In uncontaminated concrete, mill-scale absorbed calcium and silicon. At a crack, a layer, composed of a mixture of cement paste and corrosion products, developed between the mill-scale and the substrate steel. Based on the results, it was concluded that (i) corrosion occurred on the rebar only at cracks in the concrete, (ii) corrosion was initiated at the cracks immediately upon exposure to salt solution, (ii) the type of loading had a minor influence on the corrosion rates of reinforcing steel and (iv) the use of polarized area led to a significant underestimation of the current density at the crack. It is recommended that the effect of cover-depth on (i) the time to initiation of corrosion and (ii) the corrosion current density in cracked concrete be investigated.

Shahzma Jafferali Jaffer (2007). The Influence of Loading on the Corrosion of Steel in Cracked Ordinary Portland Cement and High Performance Concretes. UWSpace. http://hdl.handle.net/10012/3451