The Expendable Citizen:Patriotism, Sacrifice, and Sentiment in American Culture 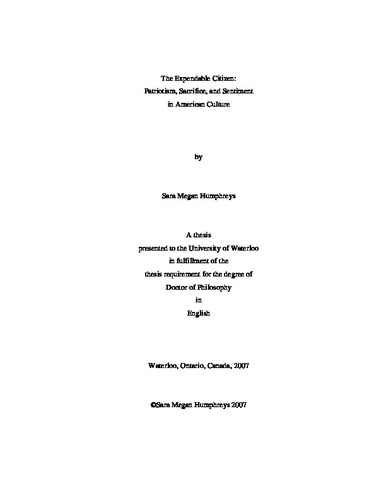 This study argues that the American citizen’s choice to perform or not perform sacrificial national duties has been heavily mediated by sentimental representations of sacrifice in popular narratives. Through an analysis of the American captivity narrative from its origins in the seventeenth century up to its current state in the contemporary period, this project also asserts that race plays a central a role in defining the type of citizen who should perform the most traumatic and costly of national sacrifices. Based on the implied reader’s sentimental identification with the suffering, white female captive, clear racial and cultural demarcations are made between the captor and the captive. These strong demarcations are facilitated through the captive’s choice to perform sacrifices that will sustain her social and racial status as a privileged and authentic identity. Her successful defense of her cultural and racial purity from a racialized threat heightens her ethos, investing her marginalized identity with power and influence. This representation of the suffering, sacrificial female captive who gains legitimacy via her fulfillment of national duty offers a sentimental model of civic duty for American citizenry to emulate. In addition, the sentimental representation of sacrifice in the captivity narrative not only stabilizes an authentic national collective, but also suggests to marginalized persons that national sacrifice can supply legitimacy and privilege. In opposition to this narrative representation of legitimacy gained through sacrifice, Indigenous authors Mourning Dove and Leslie Marmon Silko depict the sentimental performance of sacrificial duty as a dangerous discourse that internally colonizes those who desire legitimacy in the United States. These Indigenous counter-narratives show clearly that the narrativization of sentimentality and sacrifice more often than not defines America and its authentically pure citizens as worth the price of death.