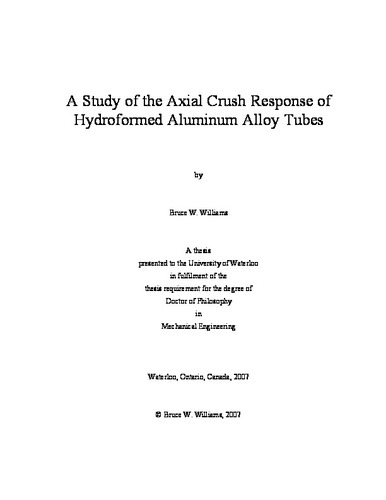 There exists considerable motivation to reduce vehicle weight through the adoption of lightweight materials, such as aluminum alloys, while maintaining energy absorption and component integrity under crash conditions. To this end, it is of particular interest to study the crash behaviour of lightweight tubular hydroformed structures to determine how the forming behaviour affects the axial crush response. Thus, the current research has studied the dynamic crush response of both non-hydroformed and hydroformed EN-AW 5018 and AA5754 aluminum alloy tubes using both experimental and numerical methods. Experiments were performed in which hydroforming process parameters were varied in a parametric fashion after which the crash response was measured. Experimental parameters included the tube thickness and the hydroformed corner radii of the tubes. Explicit dynamic finite element simulations of the hydroforming and crash events were carried out with particular attention to the transfer of forming history from the hydroforming simulations to the crash models. The results showed that increases in the strength of the material due to work hardening during hydroforming were beneficial in increasing energy absorption during crash. However, it was shown that thinning in the corners of the tube during hydroforming decreased the energy absorption capabilities during axial crush. Residual stresses resulting from hydroforming had little effect on the energy absorption characteristics during axial crush. The current research has shown that, in addition to capturing the forming history in the crash models, it is also important to account for effects of material non-linearity such as kinematic hardening, anisotropy, and strain-rate effects in the finite element models. A model combining a non-linear kinematic hardening model, the Johnson-Cook rate sensitive model, and the Yld2000-2d anisotropic model was developed and implemented in the finite element simulations. This combined model did not account for the effect of rotational hardening (plastic spin) due to plastic deformation. It is recommended that a combined constitutive model, such as the one described in this research, be utilized for the finite element study of materials that show sensitivity to the Bauschinger effect, strain-rate effects, and anisotropy.