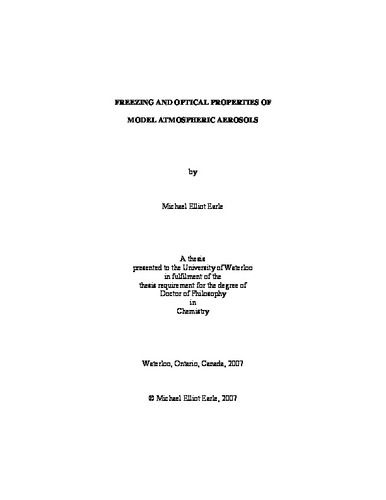 The freezing of model atmospheric aerosols – specifically, model cirrus cloud particles – was investigated through laboratory studies of supercooled water aerosols. Water droplets with radii of 1 – 2.7 µm were exposed to well-defined temperature profiles ranging from 240 – 230 K in a cryogenic flow tube apparatus, and observed using infrared extinction spectroscopy. A computational characterization procedure, based on theories of light scattering, was used to determine the size and phase composition of aerosols from extinction spectra. The procedure showed large ice fractions at uncharacteristically warm temperatures, which was attributed to the formation of ordered, “ice-like” clusters of molecules in supercooled water. Temperature-dependent complex indices of refraction were determined from the supercooled water extinction spectra, and showed changes reflecting this ordered formation. Taking the “ice-like” character of clusters into account, the homogeneous nucleation point for micrometre-sized water aerosols was determined to be 236.2 K. A microphysical model was developed to determine temperature-dependent, volume- and surface-based homogeneous nucleation rates from experimental freezing data. The model results indicated that surface nucleation was the dominant process for our range of experimental conditions. This was supported by separate studies of smaller, 0.63 and 0.75 µm radius aerosols, with larger surface-to-volume ratios. An optical microscopy apparatus was placed in the cryogenic flow tube to allow real-time imaging of particles in freezing experiments. The imaging studies demonstrated the utility of the microscopy apparatus for the observation and classification of ice crystal habits. Ray tracing and image processing algorithms were used to analyze particle geometry and size. The latter was used to validate the size retrievals from the aerosol characterization procedure. Additional studies probed the changes in the optical properties of crystalline ammonium sulfate, (NH₄)₂SO₄, due to the paraelectric-to-ferroelectric transition at 223 K. Temperature- dependent refractive indices were determined from crystalline (NH₄)₂SO₄ extinction spectra. Only small changes in these values were observed down to 223 K, below which significant changes were observed, due to the changes in lattice structure accompanying the ferroelectric transition.