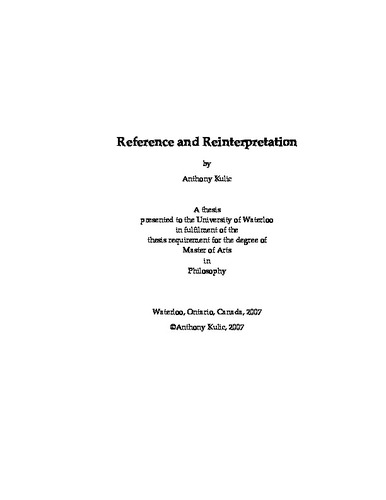 Reference is the relation held to obtain between an expression and what a speaker or thinker intends the expression to represent. Reference is a component of interpretation, the process of giving terms, sentences, and thoughts semantic content. An example of reference in a formal context involves the natural numbers, where each one can be taken to have a corresponding set-theoretic counterpart as its referent. In an informal context reference is exemplified by the relation between a name and the specific name-bearer when a speaker or thinker utters or has the name in mind. Recent debates over reference have concerned the mechanism of reference: How is it that we can refer? In informal contexts, externalists see the reference relation as explicable in terms of the salient causal relations involved in the naming of a thing, or a class of things, and the ensuing causal chains leading to a term’s use. Opponents of this view—internalists—see the reference relation as being conceptually direct, and they take the external approach to rely on untenable metaphysical assumptions about the world’s structure. Moreover, some internalists take the permutability—i.e. the consistent reinterpretation—of certain referential schemes to confound the externalist picture of reference. In this thesis I focus on the reference of theoretical terms in science, and I argue for an externalist treatment of natural kinds and other theoretical elements. Along the way I offer a defense of the externalist’s pre-theoretic metaphysical assumptions and emphasize their central role in the interpretation of scientific languages. The externalist approach acknowledges the necessary constraints on reference-fixing that account for the schemes we employ, and this, I argue, confounds the permutation strategy.