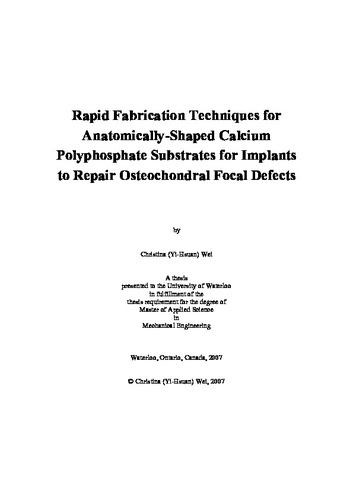 The purpose of the present study is to develop techniques for manufacturing anatomically-shaped substrates of implants made from calcium polyphosphate (CPP) ceramic. These substrates have tissue-engineered cartilage growing on their top surfaces and can be used as implants for osteochondral focal defect repair. While many research groups have been fabricating such substrates using standard material shapes, e.g., rectangles and circular discs, it is considered beneficial to develop methods that can be integrated in the substrate fabrication process to produce an implant that is specific to a patient’s own anatomy (as obtained from computer tomography data) to avoid uneven and/or elevated stress distribution that can affect the survival of cartilage. The custom-made, porous CPP substrates were fabricated with three-dimensional printing (3DP) and computer numerically controlled (CNC) machining for the first time to the best of the author’s knowledge. The 3DP technique was employed in two routines: indirect- and direct-3DP. In the former, 3DP was used to fabricate molds for pre-shaping of the CPP substrates from two different powder size ranges (<75 μm and 106-150 μm). In the latter, CPP substrates were produced directly from the retrofitted 3DP apparatus in a layer-by-layer fashion from 45-75 μm CPP powder with a polymeric binder. The prototyped samples were then sintered to obtain the required porosity and mechanical properties. These substrates were characterized in terms of their dimensional shrinkage and density. Also, SEM images were used to assess the particle distribution and neck and bond formations. The substrates produced using the indirect-3DP method yielded densities (<75 μm: 66.28 ± 11.62% and 106-150 μm: 65.87 ± 6.12%), which were comparable to the substrates used currently and with some success in animal studies. Geometric adjustment factors were devised to compensate for the slight expansion inherent in the 3DP mold fabricating process. These equations were used to bring the plaster molds into true dimension. The direct-3DP method has proven to be the ultimate choice due to its ability to produce complex anatomically-shaped substrates without the use of a chemical solvent. In addition, it allows for precise control of both pore size and internal architectures of the substrates. Thus, the direct-3DP was considered to be superior than the indirect-3DP as a fabrication method. In the alternative CNC machining approach to fabrication, the ability to machine the CPP ceramic was feasible and by careful selection of the machining conditions, anatomically-shaped CPP substrates were produced. To develop strategies for optimizing the machining process, a mechanistic model was developed based on curve fitting the average cutting forces to determine the cutting coefficients for CPP. These cutting coefficients were functions of workpiece material, axial depth of cut, chip width, and cutter geometry. To explore the utility of this modelling approach, cutting forces were predicted for a helical ball-end mill and compared with experimental results. The cutting force simulation exhibits good agreement in predicting the fundamental force magnitude and general shape of the actual forces. However, there were some discrepancies between the predicted and measured forces. These differences were attributed to internal microstructure defects, density gradients, and the use of a shear plane model in force prediction that was not entirely appropriate for brittle materials such as CPP. The present study successfully developed 3DP and CNC fabrication methods for manufacturing anatomically-shaped CPP substrates. Future studies were recommended to explore further optimization of these fabrication methods and to demonstrate the utility of accurate substrates shapes to the clinical application of focal defect repair implants.