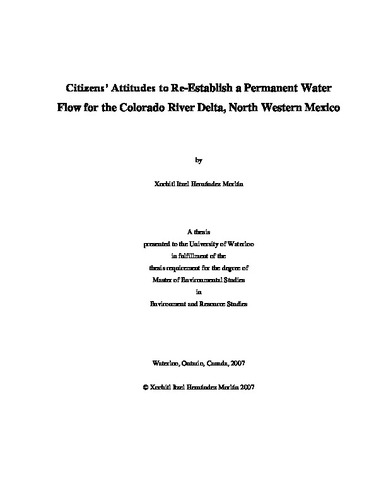 Ecosystem services and goods are non-market values that are increasingly being accounted through contingent valuation methods and more specifically by studying people’s willingness-to-pay for them. Large ecosystem restoration is an area that benefits from economic valuation because placing a monetary value proves that restoration efforts are justified to preserve resources for future generations, wanted by a community, and even a profitable investment of public funds. However, what determines that a community supports and understands restoration efforts is linked to their social, economic, cultural, and geographic reality. In this study I adopted the idea of willingness-to-pay to examine people’s attitudes towards river flow restoration efforts in the Colorado River Delta. The Colorado River Delta is a resilient ecosystem that has endured severe river flow depravation for more than 70 years now; yet, this ecosystem still provides many environmental services and goods and its restoration is well justified for that. This research mainly reveals that the Colorado River Delta is still an undervalued ecosystem despite its resiliency and the many regional benefits it still provides. This study has two research questions. Fist, I determined what factors influence Mexicali’s willingness-to-pay. Second, I compared willingness-to-pay attitudes between the cities of Mexicali and San Luis Rio Colorado (SLRC); two neighboring Mexican cities of different size and economic structure but of similar social, ecologic and geographical conditions. The instrument to collect field data was a survey that posed a realistic river flow restoration scenario at a range of prices from 10 to 90 pesos in order to test people’s willingness-to-pay; a total of 564 surveys were delivered face to face in Mexicali. Subsequently, I compared Mexicali survey results with a previous SLRC survey. Descriptive statistics, non-parametric analysis, and qualitative analysis were the main instruments to arrive to my conclusions. Within Mexicali, I found that parenthood and the perception of received benefits from the river were the most significant factors that determined people’s willingness-to-pay. Migration was also a salient socio-demographic factor that probably has an influence on people’s attitudes towards river flow restoration. When making comparisons between cities I found that SLRC is more willing to pay than Mexicali, which confirmed my hypothesis that environmental awareness influences willingness-to-pay in each city given that SLRC is a true river city while Mexicali is 64 km away from the river. Pricing was also influential in both cities. People’s exposure to the river varied from one city to the other –SLRC people have more interactions with the river than people from Mexicali do, thus matching again the difference in willingness-to-pay attitudes of each city. Although income, education, frequency of visits, and awareness of dry river conditions were expected to have a clear connection to willingness-to-pay within Mexicali, I found only a marginal statistical relationship that was very close to be significant. This was due to the fact that I analyzed the dependency of those variables for all prices and not at a specific price range where the actual average willingness-to-pay resides. Finding that average and then analyzing the relationships again should clarify this issue. What motivates people to pay was related to resource conservation and the recognition of the river’s ecological importance. What motivates people to not pay relates to negative attitudes such as incredulity and lack of trust in Mexican institutions. My main recommendations are to raise local environmental awareness of river issues with environmental education, to address local negative attitudes towards river restoration, and to explore the analysis of these data with other approaches such as socio-psychological models.