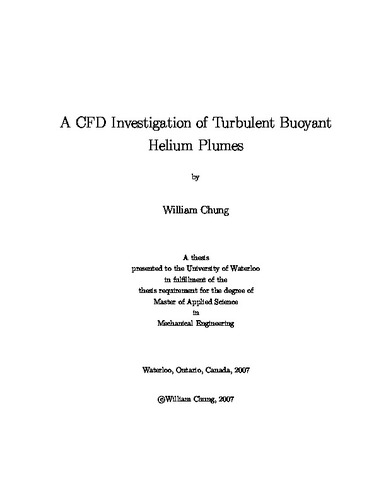 The objective of this work is to assess the capabilities of two modeling approaches, Reynolds-Averaged Navier Stokes (RANS) and Large Eddy Simulation (LES), to investigate turbulent buoyant helium plumes for the purpose of studying the dynamics of buoyancy driven plumes in the near source region. In this case, the velocity and plume concentration of the plume are predicted. RANS was applied to a model planar wall plume and predictions were compared to experimental data gathered in the self-preserving region. It was also used to model an axisymmetric plume with results compared to experimental data gathered in the near source region. The Simple Gradient Diffusion Hypothesis (SGDH) and the Generalized Gradient Diffusion Hypothesis (GGDH) were implemented in the standard k-epsilon model for the planar plume. The CFX buoyancy model in the commercial code, as well as SGDH and GGDH, were applied in predicting the characteristics of the axisymmetric plume. For the planar plume, good agreement with the experimental data was found when the SGDH approach was used. Both spreading rates and maximum values of velocity and mixture fraction were well predicted. Larger discrepancies between predictions and data were noticed with the GGDH model. Both models showed minimal sensitivity to the model constant, C3epsilon. In the case of the axisymmetric plume, all models were highly sensitive to the buoyancy constant. The GGDH model yielded the best results. In particular very good agreement was achieved for the radial profiles of the streamwise velocity. The axisymmetric plume was also simulated using LES. Initially the Smagorinsky constant was set at the default value of 0.2 and the grid size was varied to determine the dependency of the time averaged and rms quantities for velocity and plume concentration on the grid spacing. The two finest meshes tested produced similar time averaged values for velocity and plume concentration indicating that they were less sensitive to grid spacing. These time averaged results also showed that values for streamwise velocity and plume concentration along the central axis were significantly over predicted compared to the experimental results. Time-averaged centerline streamwise velocity plots showed that the streamwise velocity from the numerical results continue to increase while the experimental values begin to decrease after 0.69 m. This indicated that the transition from laminar-toturbulence was poorly predicted. Rms quantities remained sensitive to the mesh spacing even at the finest mesh tested; however the accuracy of the rms results appeared to improve as the grid was refined. Setting the Smagorinsky constant to zero produced a more accurate time averaged predictions but the rms quantities worsened.