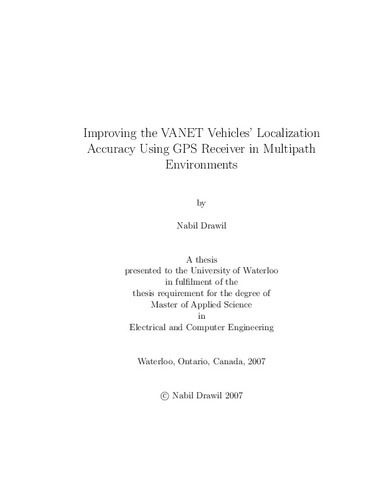 The Vehicular Ad-hoc Network (VANET) has been studied in many fields since it has the ability to provide a variety of services, such as detecting oncoming collisions and providing warning signals to alert the driver. The services provided by VANET are often based on collaboration among vehicles that are equipped with relatively simple motion sensors and GPS units. Awareness of its precise location is vital to every vehicle in VANET so that it can provide accurate data to its peers. Currently, typical localization techniques integrate GPS receiver data and measurements of the vehicle’s motion. However, when the vehicle passes through an environment that creates a multipath effect, these techniques fail to produce the high localization accuracy that they attain in open environments. Unfortunately, vehicles often travel in environments that cause a multipath effect, such as areas with high buildings, trees, or tunnels. The goal of this research is to minimize the multipath effect with respect to the localization accuracy of vehicles in VANET. The proposed technique first detects whether there is a noise in the vehicle location estimate that is caused by the multipath effect using neural network technique. It next takes advantage of the communications among the VANET vehicles in order to obtain more information from the vehicle’s neighbours, such as distances from target vehicle and their location estimates. The proposed technique integrates all these pieces of information with the vehicle’s own data and applies optimization techniques in order to minimize the location estimate error. The new techniques presented in this thesis decrease the error in the location estimate by 53% in the best cases, and in the worst case produce almost the same error in the location estimate as the traditional technique. Moreover, the simulation results show that 60% of the vehicles in VANET decrease the error in their location estimates by more than 13.8%.