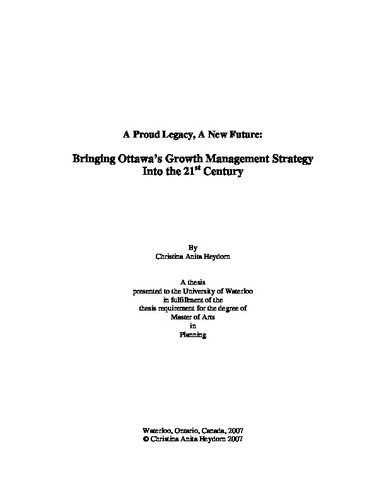 As Canada’s capital, the City of Ottawa has benefited from several comprehensive land use planning exercises since the early 1900s. Early plans carried out by the federal government were led by Prime Ministers who, in wanting to beautify the region, initiated long range plans that spanned both sides of the Ottawa River, providing land use goals and guidance for what are today the cities of Ottawa and Gatineau. The planning context changed through the 1970s, however. The federal government played a lesser role in land use planning as regional and area municipal governments grew and an expanding technically trained staff developed local plans. It was in the absence of a strong regional plan aimed at controlling outward expansion that there was rapid growth of low density suburban communities outside of the National Capital Commission greenbelt. Today, planning policy in Ottawa recognizes the environmental, social, and economic benefits of compact development and encourages by, in part, directing growth to the existing built-up area. Unfortunately, residential intensification efforts in the City have been disappointing. While the City has developed a variety of policies and programs to encourage and support residential intensification, it appears site level constraints have prohibited it to occur in a significant way. This research is concerned with identifying weaknesses in the City of Ottawa’s current growth management strategy. The purpose of this research is to provide recommendations that can be used to strengthen Ottawa’s growth management policies and programs to more effectively achieve the compact urban form desired by the municipality. The findings demonstrate that there is some level of disconnect between what recent literature and key informant interviews identify as the barriers to residential intensification at the site level and the motherhood principles for compact development at the municipal level. More specifically, barriers can be summarized as community and political resistance, regulatory challenges, and policy vs. market realities. It is recommended that the City of Ottawa adopt a strengthened strategy that establishes achievable growth and intensification targets; encourages community support for compact development; considers growth over the longer term and with a regional perspective; and is advocated by strong leaders. Only in this way can the City create an improved strategy that will, like earlier plans, make Ottawa once again a proud leader in urban planning efforts in Canada.