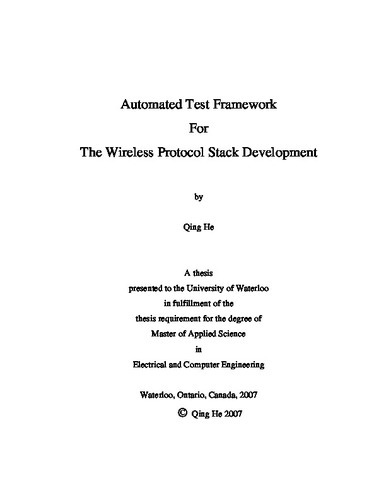 Testing plays an important role in the wireless protocol stack development. In order to free the testers out of the shielded chamber, allow both the developers and the testers to use the test systems remotely and maximize the expensive test system usage. An automated test framework is highly demanded. In this thesis, the design of the automated test framework is introduced. There are four main components in the test framework. They are the front end, scheduler, test engine and data storage. The architecture and the protocol among these components are described. Further, the evaluation of the scheduler is conducted based on the queueing theory. Based on the simulation result, a good scheduling algorithm is proposed. Compared with the original scheduling algorithm, the new algorithm improves the performance of the low priority users significantly when the test systems are limited. Moreover, the detail design of the test engine is presented. With the control of the intelligent test engine, the automated test framework has the capability to launch the test cases automatically, catch the commands sent by the test system and manipulate the SUT (System Under Test) without human’s interrupt. It fulfills the objective of automation. The automated test framework has been deployed and is working well.