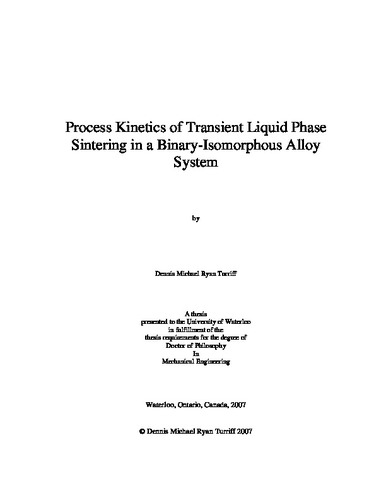 The problem of inadequate measurement techniques for quantifying the isothermal solidification process during transient liquid phase sintering (TLPS) in binary isomorphous systems such as Ni-Cu, and the resulting uncertainty regarding the solidification mechanism and its sensitivity to important process parameters, has been investigated. A unique combination of differential scanning calorimetry (DSC), neutron diffraction (ND), and metallographic techniques has enabled the quantitative characterization of important TLPS stages (i.e., solid-state sintering, melting and dissolution, isothermal solidification, and homogenization) as well as verifying the re-melt behaviour of post-sintered specimens and measuring variable melting point (VMP) properties. This has resulted in the advancement of the fundamental understanding of liquid formation and its removal mechanism during isothermal, or diffusional, solidification. The Ni-Cu system was chosen for experimentation due to its commercial relevance as a braze filler material and also because it is an ideal model system (due to its isomorphous character) that is not well understood on a quantitative or phenomenological basis. Samples consisted of elemental Ni and Cu powder mixtures of varying particle size and composition. In DSC experiments, the progress of isothermal solidification was determined by measuring the enthalpy of melting and solidification after isothermal hold periods of varying length and comparing these to the measured enthalpy of pure Cu. The low melting enthalpies measured for all Ni/Cu mixtures heated just past the Cu melting point (1090°C) indicate that solid-state sintering and interdiffusion during heat-up significantly suppress initial liquid formation and densification from the wetting liquid. For samples heated well past the Cu melting point (1140°C), Ni dissolution causes increased initial liquid fractions and densification. It was found that significantly more time was required for complete liquid removal at 1140°C vs. 1090°C. This is attributed to the observed increase in initial liquid fractions formed at higher processing temperatures due to the dissolution of Ni. This effectively counteracts the increased diffusivities at these temperatures, and thus more time is required to completely remove the increased liquid content. TLP mixtures sintered at 1140°C using three different particle sizes revealed that fine base metal Ni particles cause high degrees of solid-state interdiffusion during heat-up, small initial liquid fractions, and accelerated liquid removal rates due to high surface area/volume ratios. A diffusion-based analytical model was developed to account for these effects (i.e., particle size, temperature, solid-state sintering, and dissolution). Comparison with experimental DSC results reveals that this model can accurately predict liquid removal given accurate diffusivities. Metallographic analysis of post-sintered DSC specimens via SEM and EDS indicates that isothermal liquid solidification leaves behind Ni-rich cores surrounded by Cu-rich matrix regions having compositions given by the Ni-Cu phase diagram solidus (CS) at a selected isothermal processing temperature (TP). ND experiments were used to investigate the melting event and interdiffusion during the isothermal hold segment by analyzing the evolution of the {200} FCC peaks of Ni and Cu. ND patterns were collected in situ at 1 minute intervals during prolonged sintering cycles for larger powder specimens. The Cu melting event was characterized by an abrupt decrease in Cu peak intensity at 1085°C as well as a shift towards higher 2 angles corresponding to lower Cu contents. This shifted residual peak (hereafter referred to as the CS peak) originates from regions of the specimen having compositions near solidus at TP. Immediately following the melting event, the evolution of ND patterns shows that these CS peaks grow rapidly, indicating the isothermal growth of a Cu-rich phase. These in situ findings confirmed the metallographic and DSC data and indicated that isothermal solidification of the liquid phase proceeds via the growth of a solute-rich solid solution layer surrounding the Ni particles. This occurs by the transient progression of the solid/liquid interface at compositions given by the liquidus and solidus (CS/CL). During sintering, diffraction intensities gradually increased at intermediate 2 angles between previous Ni and Cu peaks. ND patterns gradually evolved from initially having a broad double-peak profile to a sharper single-peak profile due to increased Ni-Cu interdiffusion. The 2position and width of the post-sintered peaks indicated very homogeneous sintered alloys. Metallographic analysis of post-sintered specimens having undergone prolonged sintering and homogenization revealed extensive Kirkendall pore formation from unequal diffusivities (DCu > DNi). In this study, the unique combination of diffusion-based modelling as well as DSC, ND, and supporting metallographic analysis has enabled the identification of characteristic sintering behaviour, important process parameters, and processing windows for TLPS in Ni-Cu systems. Quantitative and in situ information of this nature is absent in the previous TLPS literature.