The Effect of Electricity-Use Feedback on Residential Consumption: A Case Study of Customers with Smart Meters in Milton, Ontario 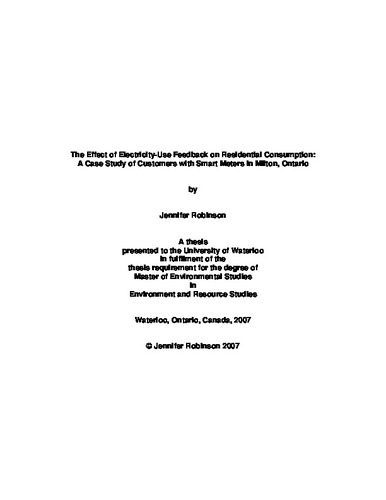 Faced with a looming electricity crisis, the provincial government is calling for Ontarians to adopt a “culture of conservation”, and is planning to equip all residential dwellings with new metering infrastructure known as “smart meters” by 2010. In addition to providing residents with the ability to “shift” their electricity consumption from the most expensive “on-peak” times of the day, the data from these meters can be used to provide residents with detailed information, or feedback, regarding their consumption patterns. This research assessed whether electricity-use feedback affected households’ electricity consumption behaviour, whether feedback effected pro-conservation attitude changes, and what types of feedback were most effective in these regards. An initial mail survey was sent to 1,257 smart metered Milton, Ontario homes to obtain information regarding residents’ appliances and their consumption behaviour and attitudes. Of the 298 respondents, most of whom were living in homes that were less than seven years old, 106 were chosen to receive weekly household-specific feedback in various formats from July to October 2006. A follow-up survey was conducted to assess any changes in attitude as a result of the feedback, and weather-adjusted 2005 and 2006 consumption data were used to quantitatively discern any resulting consumption changes. While overall results revealed that the feedback made little difference in household consumption levels compared to the 2005 baseline period, there were some indications that it was effective in encouraging shifting, and had the opposite effect on overall conservation (i.e. it encouraged increased consumption). Also, while the comparison of “pre-” and “postfeedback” surveys revealed the feedback had no measured effect on encouraging proconservation attitudes, overall, customer acceptance of the feedback was high.

Jennifer Robinson (2007). The Effect of Electricity-Use Feedback on Residential Consumption: A Case Study of Customers with Smart Meters in Milton, Ontario. UWSpace. http://hdl.handle.net/10012/3260