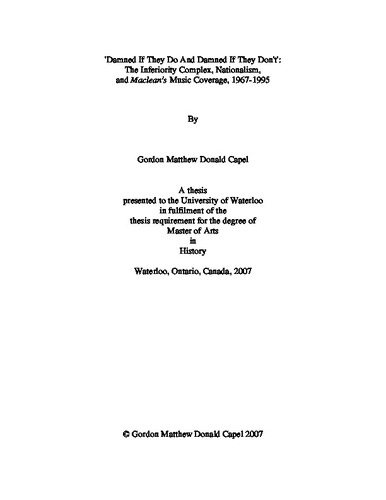 This thesis critically analyses music coverage in Maclean’s between 1967-1995, and reveals that the magazine continually stressed Canadian music as inferior to that produced by foreign artists. Only during times of intense nationalism were Canadian musicians positively received in its pages. More generally, domestic productions were seen as deficient. The historical components of this investigation reveal an essential irony in the perception of Canadian music during the last four decades of the 20th century. Despite nationalist rhetorics and Maclean's self-appointed title of "Canada's National Newsmagazine," its critics consistently emphasised that Canadian music was of poor quality in the 1967-1995 period.