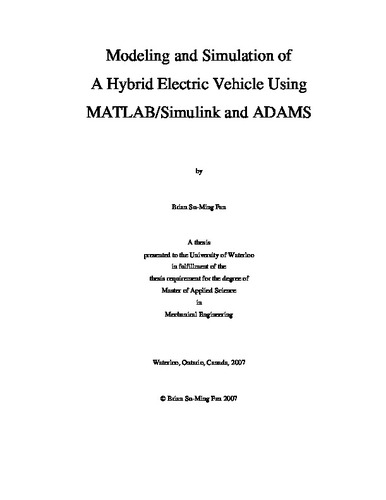 As the global economy strives towards clean energy in the face of climate change, the automotive industry is researching into improving the efficiency of automobiles. Hybrid vehicle systems were proposed and have demonstrated the capability of reducing fuel consumption while maintaining vehicle performance. Various hybrid vehicles in the form of parallel and series hybrid have been produced by difference vehicle manufacturers. The purpose of this thesis is to create a hybrid vehicle model in MATLAB and ADAMS to demonstrate its fuel economy improvement over a conventional vehicle system. The hybrid vehicle model utilizes the Honda IMA (Integrated Motor Assist) architecture, where the electric motor acts as a supplement to the engine torque. The motor unit also acts as a generator during regenerative braking to recover the otherwise lost kinetic energy. The powertrain components’ power output calculation and the control logic were modeled in MATLAB/Simulink, while the mechanical inertial components were modeled in ADAMS. The model utilizes a driver input simulation, where the driver control module compares the actual and desired speeds, and applies a throttle or a braking percent to the powertrain components, which in turns applies the driving or the braking torque to the wheels. Communication between MATLAB and ADAMS was established by ADAMS/Controls. In order to evaluate the accuracy of the MATLAB/ADAMS hybrid vehicle model, simulation results were compared to the published data of ADVISOR. The West Virginia University 5 Peaks drive cycle was used to compare the two software models. The results obtained from MATLAB/ADAMS and ADVISOR for the engine and motor/generator correlated well. Minor discrepancies existed, but were deemed insignificant. This validates the MATLAB/ADAMS hybrid vehicle model against the published results of ADVISOR. Fuel economy of hybrid and conventional vehicle models were compared using the EPA New York City Cycle (NYCC) and the Highway Fuel Economy Cycle (HWFET). The hybrid vehicle demonstrated 8.9% and 14.3% fuel economy improvement over the conventional vehicle model for the NYCC and HWFET drive cycles, respectively. In addition, the motor consumed 83.6kJ of electrical energy during the assist mode while regenerative braking recovered 105.5kJ of electrical energy during city driving. For the highway drive cycle, the motor consumed 213.6kJ of electrical energy during the assist mode while the regenerative braking recovered 172.0kJ of energy. The MATLAB/ADAMS vehicle model offers a simulation platform that is modular, flexible, and can be conveniently modified to create different types of vehicle models. In addition, the simulation results clearly demonstrated the fuel economy advantage of the hybrid vehicle over the conventional vehicle model. It is recommended that a more sophisticated power management algorithm be implemented in the model to optimize the efficiencies of the engine and the motor/generator. Furthermore, it is suggested that the ADAMS vehicle model be validated against an actual vehicle, in order to fully utilize the multi-body vehicle dynamics capability which ADAMS has to offer.