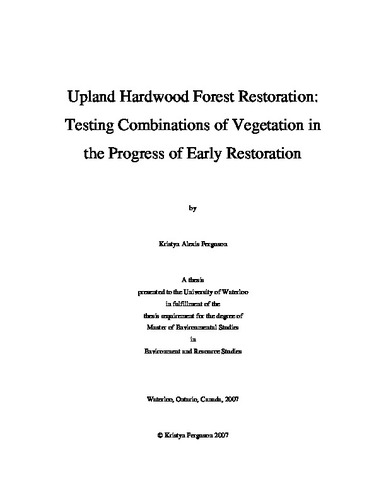 Progress in early ecological restoration is a measure which has not been extensively studied in the relatively new body of literature surrounding this field of study. Early restoration is an extremely beneficial area of study due to the increasing number of degraded areas which require immediate attention in order to stabilize soil, or deter exotic species invasion. An early restoration effort was implemented and observed in Natchez Hills, an Environmentally Sensitive Policy Area in the Region of Waterloo from May 2006 to June 2007. Natchez Hills is a maple-beech dominated forest which has been severely degraded by mountain biking, and faces other pressures such as urbanization, fragmentation and invasive species encroachment. The experiment was designed so that different combinations of three understory plants could be tested for their effectiveness at progress in early restoration. The species selected for use in this study were Erythronium americanum Ker. (trout lily), Podophyllum peltatum L. (mayapple) and Caulophyllum thalictroides L. Michx. (blue cohosh). The experiment was designed across four blocks of the forest study site with varying degrees of degradation, with eight 1 m2 plots per block which contained one of the seven combinations of understory plants or the control treatment. In the spring of 2006, E. americanum and P. peltatum were planted at a density of 6 plants m-2, and C. thalictroides was transplanted into the plots at a density of 2 plants m-2. The transplants were monitored on a biweekly basis through the months of May to August in 2006. Invasive species in the plots were controlled by aboveground biomass clipping during the same period. In the spring of 2007, second season survivorship was measured by counting the number of plants which returned to the plots. Erythronium americanum returned at a rate of 92%, P. peltatum at a rate of 97% and C. thalictroides at a rate of 100%. The return rates were statistically analyzed using one-way ANOVA. Results showed no significant differences (p<0.05) between the seven experimental treatments. Additionally, return rates examining differences between the experimental blocks (block effect) were also not significantly different (p<0.05). These results indicate, respectively, that combinations do not perform significantly better than solitary plantings of any of the three species, and that these plants can be successfully planted into varying levels of degradation. During the 2007 field season, while measuring transplant return rates, some unexpected results were observed. These included asexual plants returning as sexual plants, bearing flowers and producing fruit (P. peltatum and C. thalictroides), and returning transplants spawning extra clonal individuals within the plots (P. peltatum). These occurrences added an extra layer of progress to the early restoration effort by increasing both reproductive potential and biomass cover within the experimental plots. Overall the restoration effort was deemed to be successful, based on the structural success obtained in this study. However, it should be noted that the field of restoration ecology still seeks a unified answer on what makes a restoration project successful, so determining that progress was achieved by structural means should be taken only within the context of this type of study. This study was helpful in informing the overlooked areas of understory restoration, early-stage restoration and the use of combinations. Though there remains a significant demand for more research in all of these areas, this study has served the purpose of identifying a usable protocol for real world restoration efforts. The three species used can be highly recommended for future restoration within their geographical range, into a range of degradation conditions, in any combination.