Human Nature and Morality: An invesitgation of the evidence for and implications of genetically-based moral traits 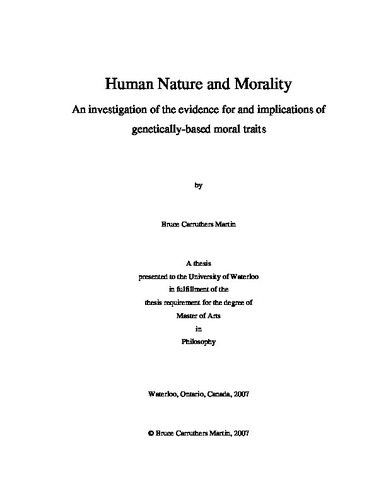 In his recent book, Moral Minds, Marc Hauser claims that humans are genetically endowed with a moral faculty operating in much the same way as our linguistic faculty, and that this faculty delimits normative moral systems. Further, he states that this work represents the beginning of what will become a science of morality. These claims contrast sharply with the conception of human nature presupposed by many of the dominant Western moral theories. For the most part, these conceptions of human nature are not flattering: they suggest that our natural instincts, in large part, or in whole, are not conducive to living a moral life. Given these presuppositions, such theories typically call for setting aside our natural instincts when determining the basis upon which normative moral theory should be established. This thesis seeks to show that there is a middle ground between these two views. On my account, recent scientific learning about innate traits impacting our behaviour towards others can be employed to construct a conception of human nature that is at odds with that used by a number of the dominant Western moral theories. As the impact of such innate traits is constrained by our analytic intellect, however, I argue that views such as Hauser’s overstate the implications for normative moral theory.

Bruce Carruthers Martin (2007). Human Nature and Morality: An invesitgation of the evidence for and implications of genetically-based moral traits. UWSpace. http://hdl.handle.net/10012/3211