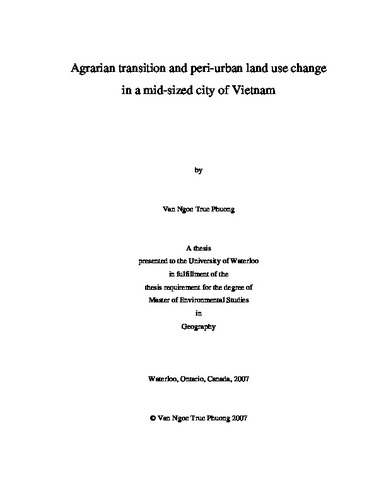 In developing countries, land management, government intervention in peri-urban land, and the striking decline of agricultural land have all affected farmers’ livelihoods and the capacity of locally supplied food for ever-growing cities. A growing body of literature has focused on the exploration of these issues in rural areas, which are believed to be the backbone of the national agriculture economy, and in peri-urban areas of large cities, which have experienced extreme changes during recent decades. But the issues are also relevant to peri-urban mid-sized cities where urbanization is in a different phase compared to the above areas. This study examines the main changes underway in the agrarian transition of peri-urban areas of Vinh city, a mid-sized city in the North Central Coast region of Vietnam. Vinh was chosen given its unique position in transforming from a mid-sized to a large city. This study explores the dynamics of agricultural production, and the role of the Vinh government in mediating urbanization and its impacts on farmers’ livelihoods. In order to attain the objectives, interviews with local leaders, and a survey with farmers were conducted, and a GIS database was also developed. The findings regarding agricultural production in the case study demonstrate that this mid-sized city, in the early phase of development, manifests itself as a duplicate of larger cities, escalating the threat of food accessibility from local sources. Duplication is in the sense that the peri-urban population in Vinh still depends largely on agriculture with a shift to commercial agriculture with higher value products despite the shrinkage of agricultural land. Agricultural production primarily uses manual family labor, and traditional products are substantially subsistent. Compared to larger cities, post-production activities (including processing, packaging, marketing, and delivery) and the organization of the agrofood supply chain in Vinh are underdeveloped due to minimum support from local and outside agencies. The case study confirms that as general trend in developing countries, Vietnam’s land policies favor the expropriation of agricultural land for industrialization and modernization. The findings also demonstrate the heterogeneity of land administration in Vietnam, structured from the ‘bottom-up’ mechanism, through which Vinh’s local authorities have the prerogative to not issue land use right certificates of agricultural land despite the national policy. This has occurred in order to control land markets to satisfy the city’s goal of transforming to an independent municipality. The situation is perpetuated by the absence of agricultural land legislations in a peri-urban context while contemporary legislation has been developed to address the rural areas because of their importance in the national agriculture economy. This is an issue for land management in Vietnam as well as in other developing countries. Finally, the findings on land expropriation in the peri-urban areas of Vinh city also confirm that direct government intervention through land expropriation in developing countries, with low compensation and lack of alternative vocational training, undermines farmers’ livelihoods and threatens the local food supply.