A PHENOMENOLOGICAL MODEL OF SHAPE MEMORY ALLOYS INCLUDING TIME-VARYING STRESS 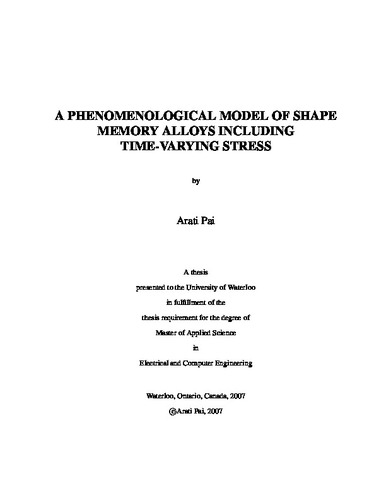 Shape memory alloys (SMAs) are metallic materials, which have two main stable crystalline phases: austenite, a high temperature phase and martensite, a low temperature phase. Austenite and martensite each have unique physical and mechanical properties, and transformation between these phases enables two effects known as the shape memory effect (SME) and superelasticity. When a material that displays the SME is plastically deformed at low temperature, a heat input will cause the SMA to return to its original shape before the deformation. At higher temperatures, the material displays an effect called superelasticity, where strains of up to 10% are recoverable. These characteristics of SMA allow for significant amounts of strain recovery, and enable the design of SMA actuators. The temperature in an SMA actuator is generally controlled by resistive heating, also know as joule heating, and the strain recovery capabilities are used to do work on a load, thereby creating an electro-mechanical actuator. SMA actuators have attractive properties such as high energy density, smooth and silent actuation, reduced part counts compared to traditional alternatives, and scalability down to the micromechanical level. The phase transformation in SMA actuators, however, is highly non-linear. Therefore, the use of SMA as actuators, for example in positioning systems, benefits from the development of good models to predict and control the materials. The goals of this work are to develop a model suitable for real-time implementation, and that reproduces the observed behaviour of SMA actuators. The model is then inverted and used to develop a model-based controller, used in conjunction with traditional PID control to improve the precision and robustness of SMA actuators. The modelling portion of this work consists of the development of a phenomenological SMA model. The forward model is split into three blocks: a heating block, a phase kinetics block and a mechanical block. Since joule heating is commonly used in SMA actuators to bring about an increase in temperature, the heating block presents equations to convert a current input into the temperature of the wire. The phase kinetics block equations convert the calculated temperature and applied stress to the fraction of martensite present in the SMA. Finally, the mechanical model calculates the strain in the material from the martensite fraction and the applied stress. Once the model equations are presented, experimental verification tests are shown to compare physical SMA behaviour with that predicted by the model. Each of the blocks of the forward model are then inverted in order to be used as a feedforward linearizing controller. The control section of this thesis deals with the response of two common types of SMA actuators: a constant force SMA actuator and a spring-biased SMA actuator. The response of the system to step and sinusoidal signals with period of 5 seconds is investigated using two types of controllers: a traditional PI controller and the inverse-model controller in feedforward with a PI controller in feedback. Additionally, the robustness of the system is investigated through the response of the system to transient and sinusoidal stress disturbances. The disturbance rejection is investigated on a constant force actuator both with and without the presence of a force sensor.