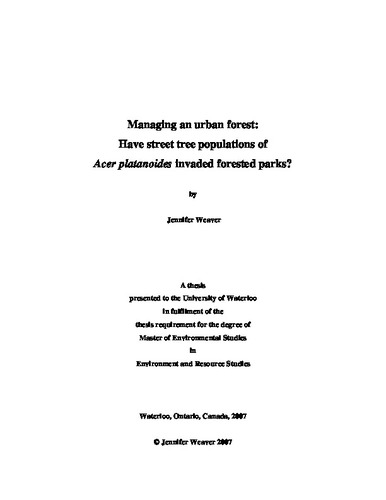 This study examined the existing, or potential, risk of invasion by street trees into an urban forested park (Breithaupt Park, a 32.5 hectare semi-forested park, and its surrounding residential neighbourhood in the City of Kitchener.). The primary research question is: What are the spatial distribution and dispersal patterns of street trees and park trees in urban areas? For street populations, height, crown spread, diameter at breast height (DBH), tree condition, trunk condition and foliage transparency were measured. Qualitative tree health indicators were used to gauge the condition of the street tree population only. For trees in Breithaupt Park, a point-quarter sampling method combined with a line-plot sampling method was used. There were 33 identified (and several unidentified) species of street trees and 24 identified species of forest trees. Acer platanoides was the most abundant street tree species, while Acer saccharum was the most abundant forest tree species. 52% of the street tree population and 9% of the forest tree population were exotic species; however, the exotics were mainly species not originating from the nearby streets (i.e. Rhamnus cathartica). Despite the well-established population of exotic invasive species such as Acer platanoides on the streets, spatial assessment of the nearby forested park revealed that relatively few exotic species had actually established there. Acer platanoides composed 1.9% of all trees, 3.2% of all saplings and 2.7% of all seedlings in the forest sample. The four possible sources of Acer platanoides seeds were trees planted on the street, trees planted in backyards, the leaf drop site in the parking lot of Breithaupt Park (only in the fall) and trees potentially planted directly in the forest. Explanations for the lack of invasion by Acer platanoides (in particular) include: 1) houses located between Acer platanoides street trees and Breithaupt Park functioning as a barrier to seed dispersal; 2) the highway traversing the northeast corner of the park; 3) the short length of time since Acer platanoides street trees reached their age of maturity to produce enough viable seeds to invade the forest and the lag time in the establishment phase; 4) unique park characteristics; and 5) opposing predominant wind directions. While Acer platanoides may be more invasive under different circumstances, it was concluded that Acer platanoides is not currently invading the park at a considerable rate but may be tending towards a future invasion. The main recommendations are: 1) to not cut down the Acer platanoides currently growing as street trees as they do not pose a high risk of invasion (though this is specific to the current study); 2) to manage the forest for invasive species and remove and restore the ecology of the forest as necessary; 3) to remove Acer platanoides currently growing in the forest; and 4) to replace dead street trees with non-invasive, hardy native trees instead of the historical planting of Acer platanoides and other exotics, in case the risk of invasion changes because of climate or urban design changes.