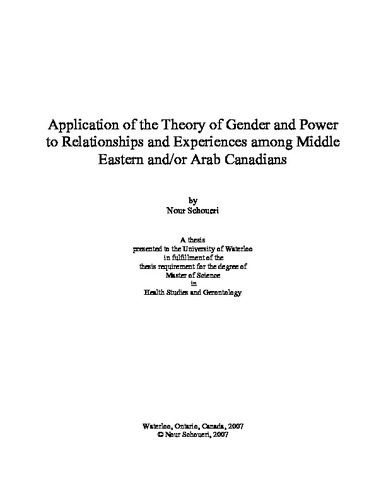 Background. The study explored associations between factors derived from the application of the Theory of Gender and Power (TGP) as they relate to HIV-risk behaviour among Middle Eastern/Arab-Canadians. This area deserves increased attention, as the proportion of HIV incident cases among Canadian women—due to heterosexual transmission—is increasing. Methods. A web-based survey was administered to Middle Eastern/Arab-Canadians who were aged 18-35 years, of Middle Eastern and/or Arab descent, living in Canada, heterosexual, and in a relationship. Multivariate regression analyses were used to assess factors associated with condom-use risk and lifetime number of sexual partners. Analyses were stratified by gender. Results. The study sample consisted of 157 participants, with more female participants (65.38%), and a mean age of 22.71 years. Females were more likely to have an older partner and more likely to be virgins, compared to males. Only a third (27.45%) of sexually active participants in this sample reported using condoms every time they have sex and participants reported a mean of 4.31 lifetime sexual partners. Factors associated with both condom-use risk and lifetime number of sexual partners varied greatly between genders. Among females, having low self efficacy towards practicing safer sex was predictive of condom-use risk. Among males, not being worried about getting HIV was predictive of condom-use risk. Thinking they knew how to use condoms was predictive of having more sexual partners among females, while being low acculturated from Middle Eastern culture was predictive of more partners among males. Conclusions. Factors associated with HIV risk varied greatly between genders among this sample and may contribute to power imbalances within relationships. The application of the TGP to this sample was moderately successful in predicting number of sexual partners among females and condom-use risk among males. However, it was not as successful in predicting condom-use risk among females and number of sexual partners among males. Many factors associated with HIV risk have been identified in this study, and should be used to create interventions designed to increase equality within Middle Eastern/Arab-Canadian relationships. However, many issues are discussed that still need to be addressed in future research.

Nour Schoueri (2007). Application of the Theory of Gender and Power to Relationships and Experiences among Middle Eastern and/or Arab Canadians. UWSpace. http://hdl.handle.net/10012/3153