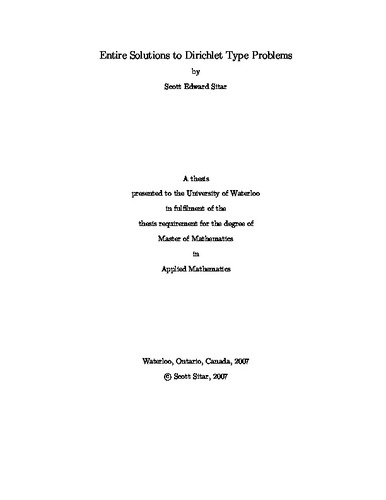 In this thesis, we examined some Dirichlet type problems of the form: \begin{eqnarray*} \triangle u & = & 0\ {\rm in\ } \mathbb{R}^n \\ u & = & f\ {\rm on\ } \psi = 0, \end{eqnarray*} and we were particularly interested in finding entire solutions when entire data was prescribed. This is an extension of the work of D. Siegel, M. Mouratidis, and M. Chamberland, who were interested in finding polynomial solutions when polynomial data was prescribed. In the cases where they found that polynomial solutions always existed for any polynomial data, we tried to show that entire solutions always existed given any entire data. For half space problems we were successful, but when we compared this to the heat equation, we found that we needed to impose restrictions on the type of data allowed. For problems where data is prescribed on a pair of intersecting lines in the plane, we found a surprising dependence between the existence of an entire solution and the number theoretic properties of the angle between the lines. We were able to show that for numbers $\alpha$ with $\omega_1$ finite according to Mahler's classification of transcendental numbers, there will always be an entire solution given entire data for the angle $2\alpha\pi$ between the lines. We were also able to construct an uncountable, dense set of angles of measure 0, much in the spirit of Liouville's number, for which there will not always be an entire solution for all entire data. Finally, we investigated a problem where data is given on the boundary of an infinite strip in the plane. We were unable to settle this problem, but we were able to reduce it to other {\it a priori} more tractable problems.