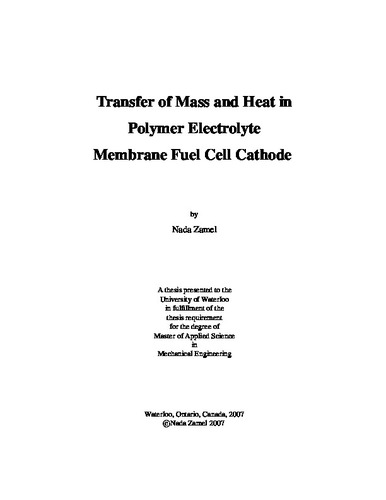 The need for alternative sources of energy with low to zero emissions has led to the development of polymer electrolyte membrane fuel cells. PEM fuel cells are electro-chemical devices that convert chemical energy to electricity by using hydrogen as the fuel and oxygen as the oxidant with water as the byproduct of this reaction. One of the major barriers to the commercialization of these cells is the losses that occur at the cathode due to the slow oxygen diffusion and sluggish electrochemical reaction, which are further amplified by the presence of liquid water. Numerous numerical and mathematical models are found in the literature, which investigate the transport phenomena in the cathode and their effects on the cell performance. In this thesis, the discussion of a two-dimensional, steady state, half cell model is put forward. The conservation equations for mass, momentum, species charge and energy are solved using the commercial software COMSOL Multiphysics. The conservation equations are applied to the cathode bipolar plate, gas diffusion layer and catalyst layer. The flow of gaseous species are assumed to be uniform in the channel. The catalyst layer is assumed to be composed of a uniform distribution of catalyst, liquid water, electrolyte, and void space. The Stefan-Maxwell equation is used to model the multi-species diffusion in the gas diffusion and catalyst layers. Due to the low relative species' velocity, the Darcy law is used to describe the transport of gas and liquid phases in the gas diffusion and catalyst layers. A serpentine flow field is used to distribute the oxidant over the active cathode electrode surface, with pressure loss in the flow direction along the channel. A sensitivity analysis is carried out to investigate the effects of pressure drop in the channel, permeability, inlet relative humidity and shoulder/channel ratio on the performance of the cell. Electron transport is shown to play an important role in determining the overall performance of the cathode. With a serpentine flow field, the oxygen consumption occurs more aggressively at the areas under the land since electrons are readily available at these areas. In addition, the reaction increases along the catalyst layer thickness and occurs more rapidly at the catalyst layer/membrane interface. The losses due to electron transport are much higher than those due to the proton transport. The sensitivity analysis put forward illustrated that with the increase of pressure drop along the channel flow field, the performance of the cell and liquid water removal are enhanced. Similarly, an increase in permeability of the porous material results in an increase in liquid water removal and cell performance. Further, the investigation of the inlet relative humidity effects revealed that the electrolyte conductivity has a significant effect on the performance up to a point. On a similar fashion, a decrease in shoulder/channel width ratio leads to an increase in performance and an increase in the leakage between neighboring channels. Finally, the addition of heat is shown to have a negative effect on the cell performance. Some recommendations can be drawn from the results of this thesis. It is recommended to develop a model to study the flow in the channel flow field in order to investigate the effects of the channel flow on the transport of species in the cell. Further, the geometry of the channel should be studied. Finally, the production of water should be analyzed. The analysis should be extended to investigate its production in vapor form only and its production as a mixture of vapor and liquid.