An Efficient Computational Method for Thermal Radiation in Participating Media 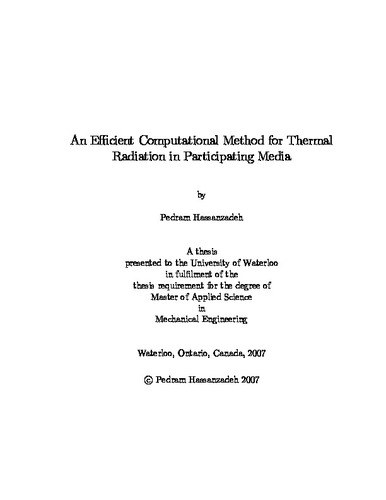 Thermal radiation is of significant importance in a broad range of engineering applications including high-temperature and large-scale systems. Although the governing equations of thermal radiation have been known for many years, the complexities inherent in the phenomenon, such as the multidimensionality and integro-differential nature of these equations, have made it difficult to obtain an accurate, efficient, and robust computational method. Developing the finite volume radiation method in the 1990s was a significant progress but not a panacea for computational radiation. The major drawback of this method, which is common among all methods that solve for directional intensities, is its slow convergence rate in many situations which increases the solution cost dramatically. These situations include large optical thicknesses, strongly reflecting boundaries, and any other factor that causes strong directional coupling like complex geometries. Several acceleration schemes have been developed in the heat transfer and neutron transport communities to expedite the convergence and reduce the solution cost, but none of them led to a general and reliable method. Among these available schemes, the two most promising ones, the multiplicative scheme and coupled ordinates method, suffer from failing on fine grids and being very complicated for complex scattering phase functions, respectively. In this research, a new computational method, called the QL method, has been introduced. The main idea of this method is using the phase weight concept to relate the directional and average intensities and re-arranging the Radiative Transfer Equation to find a new expression for the radiant heat flux. This results in an elliptic-type equation for the average intensity at each control volume which conserves the radiant energy in all directions in the control volume. This formulation gives the QL method a great advantage to solve for the average intensity while including the directional effects. Since the directional effects are included and the radiant energy is conserved in each control volume, this method is expected to be accurate and have a good convergence rate in all conditions. The phase weight distribution required by the QL method can be provided by a method like the finite volume method or discrete ordinates method. The QL method is applied to several 1D and 2D test cases including isotropic and anisotropic scattering, black and partially reflecting boundaries, and emitting absorbing problems; and its accuracy, convergence rate, and solution cost are studied. The method has been found to be very stable and efficient, regardless of grid size and optical thickness. This method establishes very accurate predictions on the tested coarse grids and its results approach the exact solution with grid refinement.