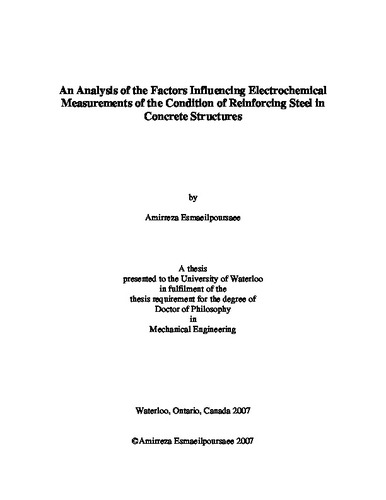 Electrochemical assessment of the condition of the steel reinforced concrete structures is being carried out increasingly and more regularly, both in the laboratory and in the field. It is important to have enough information about the factors that may affect these measurements. In this way, results obtained from different tests can be interpreted in more reliable manner and the condition of the embedded reinforcing steel bars in concrete structures can be evaluated with more confidence. The main goals of this project were: • to determine the causes of the errors in electrochemical measurements that may mislead the researchers, • to determine factors that may affect the measurements, • to attempt to manifest better interpretation of the results, • to avoid the problematic pitfalls and overcome them as much as possible. To this end, two types of concrete specimens were prepared for performing gravimetric and electrochemical tests: beams with four pre-weighed sections of rebars, and prisms with a single rebar and with different variables (cracked in two directions, carbonated and different cover depth). These have been exposed to de-icing salt for more than 2.5 years. The condition of the rebar in the beams and prisms was evaluated over this period by (i) half-cell potential measurements, (ii) galvanostatic pulse measurements (using the GalvaPulse™ and the potentiostat), (iii) potentiostatic linear polarisation resistance measurements (LPR), (iv) electrochemical impedance spectroscopy (EIS) and (v) potentiodynamic cyclic polarisation. Also, specimens were prepared to determine the amount of required time for steel to passivate itself in pore solution and mortar. Results from corrosion measurements in the laboratory show that: • Steel bar in mortar and pore solution needs time for passivation: about 7 days for steel embedded in mortar and about 3 days for steel in simulated pore solution. • Data from gravimetric tests were compared with the values calculated from electrochemical tests and results show that, in the laboratory condition, values obtained from potentiostatic LPR technique are more realistic and closer the actual mass loss than those obtained by galvanostatic techniques. • It was observed that, in most cases, when the steel bars were corroding actively, the half-cell potential values were more negative than -350 mV vs. CSE, in agreement with ASTM guidelines. • When performing the half-cell potential measurements, it was found that it is essential provide sufficient time after wetting the surface to allow the potential to stabilise. A minimum of about 15-20 minutes was found to be required. • One of the most informative electrochemical tests is the cyclic polarisation technique. The half-cell potential, corrosion rate, susceptibility to pitting, severity of corrosion, protecting potential, concentration limitations and, with appropriate procedures, Tafel constants, can be obtained by this technique. However, it is essential to choose the appropriate scan rate for the particular system, otherwise the achieved data mislead the researcher. The appropriate scan rate can be determined by using the Bode plot obtained from the EIS experiment. • To measure the concrete resistance, the galvanostatic pulse technique and EIS are suggested. Wenner four probe technique measures only the surface resistance and is, therefore, very dependant on the surface condition and is not recommended. • The guard ring in the GalvaPulse™ instrument which is designed to limit the polarised area was found to be working in reverse and, in fact, it polarises the steel even more than when it is not used. It is recommended that the guard ring electrode not be used during the measurements. • Another limitation of the GalvaPulse™ is its lack of capability to measure the high corrosion rates. • It was found that the GalvaPulse™ pulse generator unit must be calibrated every month, or before each measurement, which ever is longer period. In addition to the experiments in the laboratory, four locations were chosen for field measurements in collaboration with the Ministry of Transportation of Ontario. These measurements show that: • The half-cell potential of galvanised steel in much more negative than that in the black steel. This emphasises the importance that the ASTM C876 recommended guideline should not be used for other types of reinforcing bars. • It is recommended that half-cell potential contour map rather than the absolute values of potential be used for condition analysis. However, it is found that these maps are not constant varying with time and ambient conditions. Based on this experience, it is recommended that half-cell potential measurements be made exactly at the same time and date in different years. The results might be closer and more readily interpretable. • The measured half cell potential is a function, not only of the state of corrosion, but also of environmental factors. The temperature and relative humidity of both the atmosphere and inside the concrete play a role. The permittivity of concrete is dependent on all these factors and needs to be taken into account. • To measure the corrosion current density in the field, galvanostatic and galvanodynamic LPR and galvanodynamic polarisation can be used. The potentiostatic LPR, potentiodynamic LPR and EIS techniques appear to be limited by the size of full-scale structures and are also very sensitive to extraneous electrical noise. Consequently, they cannot be performed in the field.

Amirreza Esmaeilpoursaee (2007). An Analysis of the Factors Influencing Electrochemical Measurements of the Condition of Reinforcing Steel in Concrete Structures. UWSpace. http://hdl.handle.net/10012/3130