An Assessment of the Burden of Disease Attributable to Ambient Air Toxics in Ontario: a Disability-Adjusted Life Year (DALY) Methodology 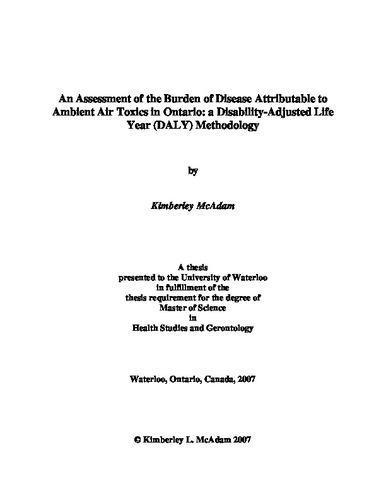 Hazardous air pollutants (HAP’s) are assumed to act without threshold meaning any level of exposure can theoretically initiate the carcinogenic process. With approximately 57,000 new cancer diagnoses and 25,900 deaths predicted in Ontario in 2006, the implications of lifetime low dose cumulative exposure to HAP’s in the etiology of cancer is unknown, yet may be significant. As such, this burden of disease (BoD) model was designed to provide a comprehensive assessment of the current and future BoD attributable to long term cumulative exposure to six carcinogenic HAP’s in two highly exposed regions of Ontario, using a summary measure of population health, disability-adjusted life years (DALY’s). Results indicated a total of 32,074 DALY’s were lost in Toronto and Southwestern Ontario (SWO) from six cancer sites in 2001, with the largest burden from cancers of the lung, followed by lymphomas, then leukemia. Approximately 0.58% of the burden (187 DALY’s) was attributable to current HAP exposures, with the largest health impacts associated with exposure to nickel refinery dusts in SWO (8.91 DALY’s) and benzene in Toronto (46.30 DALY’s). The model predicted 0.3% of the exposure attributable BoD (96 DALY’s) could be avoided in the future if ambient exposures were reduced to a feasible distribution. If ambient exposures were further reduced to levels expected if there were no anthropogenic releases, the model predicts 147 DALY’s could be avoided, such that only 0.12% of the total BoD would be attributable to natural sources of HAP’s. Results of the sensitivity analysis support the notion of the DALY as a robust measure to estimate exposure attributable health impacts, as the incorporation of alternative value choices had negligible impact on the relative importance of cancer sites, or exposures to the total BoD. Results of the model can be used by decision makers to inform public health policy regarding abatement priorities of HAP’s in Ontario, on the basis associated health impacts.