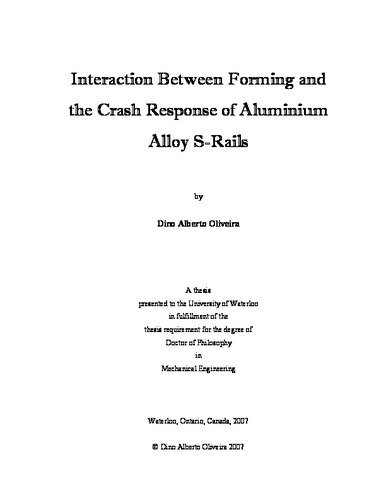 One of the principal energy absorbing structural components that influences the crashworthiness of a vehicle is the side-rail, which is also commonly referred to as an s-rail due to its shape that is reminiscent of an “s”. To improve the crashworthiness of a vehicle, in the wake of significant environmental pressures requiring vehicle light-weighting, the parameters that govern the crash response of the s-rail and the implications of light-weight material substitution need to be better understood. In this work, the main parameters that govern the crash response of an s-rail and the variables that influence them were identified and assessed through a combined experimental and numerical modelling programme. In particular, the as-formed properties of aluminium alloy s-rails, due to the tube bending and hydroforming fabrication route were examined. Tube bending, hydroforming and crash experiments were conducted to examine and assess the effects of initial tube thickness, strength, geometry, bend severity, work hardening, thickness changes and residual stresses on the crash response of the s-rail. The forming process variables, springback, thickness, strains, and force and energy response measured in the experiments were used to validate the finite element models developed herein. The validated numerical models of tube bending, hydroforming and crash provided additional insight and also allowed further investigation of the parameters governing the crash response of s-rails. The relevant parameters governing the crash response of s-rails were isolated and the basis for a set of design guidelines, in terms of maximizing energy absorption or minimizing mass, was established. The overall size is the most influential design parameter affecting the energy absorption capability of the s-rail, followed by the initial thickness, material strength, cross-sectional geometry, bend severity and hydroforming process employed, and finally boost in bending. The most significant conclusion made based on this research is that the effects of forming history must be considered to accurately predict the crash response of the s-rail. There are additional conclusions with respect to the tube bending and hydroforming processes, as well as s-rail crash response, that will contribute to improving the design of s-rails for better crashworthiness of vehicles.