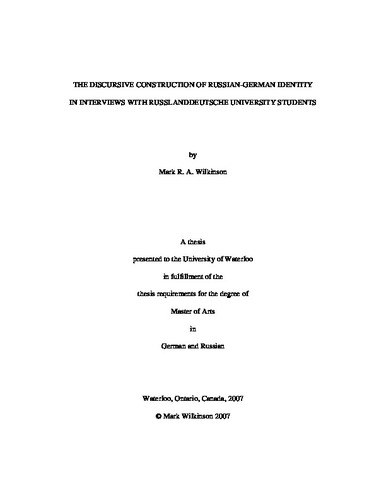 In this sociolinguistic study, qualitative interviews were used in examining discursive identity construction among russlanddeutsche Aussiedler. The interview group was composed of russlanddeutsche university students attending the Universität Mannheim in Germany, differentiating it from much of the previous research. In my analysis, working from a social constructionist perspective, I primarily make use of Positioning Theory and Critical Discourse Analytic techniques to show how the interviewees 1) construct groups; 2) relate to language; and 3) position themselves in relation to existing discourses in contemporary German society, including instances of resistance to those discourses. Ethnically Germans, but living on Russian/Soviet/post-Soviet territory for generations, Aussiedler have special claims to German citizenship and began their return to Germany after suffering mass repression for decades under the Soviet regime. In the aftermath of WWII, their emigration to Germany was initially limited, but reached high levels in the late 1980s and throughout the 1990s, as travel restrictions were relaxed and the Iron Curtain fell. Expecting to find acceptance as Deutsche unter Deutschen [Germans among Germans], the opposite often occurs: they are frequently categorized as ‘the Russians.’ Indeed, one of the most frequent comments made by members of this group is: In Russland waren wir Deutsche, hier sind wir Russen [In Russia we were Germans, here we are Russians]. In many respects, they have a stigmatized identity in both countries, Russia and Germany, and for this reason represent a particularly interesting group for identity research. Recent publications, most notably Reitemeier (2006a), have made mention of this ‘stigmatized identity’ and also of the fact that many Russlanddeutsche possess hybrid identities. These two concepts, stigma and hybridity, are explored throughout the thesis. The work begins by outlining the migratory, legal, and linguistic history of Russlanddeutsche. This is followed by an explanation of theoretical and methodological approaches which used to study the data, including Positioning Theory, stigma theory, a variant of Conversation Analysis, and Critical Discourse Analysis. The bulk of the thesis is then spent on the analysis of the qualitative interview data using those theories and methodologies. I conclude by summarizing my findings and suggesting areas for further research.