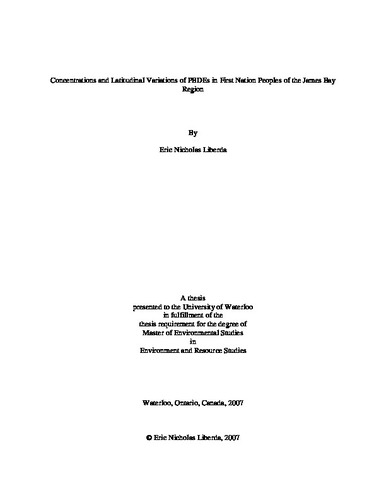 Concerns regarding the persistence, bioaccumulation, long-range transport, and adverse health effects of polybrominated dipheyl ethers (PBDEs) have recently come to light. PBDEs are quickly becoming a ubiquitous pollutant and have been found globally in sediment, aquatic mammals, fish, bird eggs, human milk, serum, and adipose tissue. Due to their persistence and lipophilicity, PBDEs may biomagnify through the food chain and could pose a danger to those who consume these contaminated animals. Many First Nation communities in the James Bay region rely in part on a subsistence diet; therefore, these communities have the potential to carry high levels of PBDEs. Additionally, PBDEs have been shown to be preferentially deposited in the sub-Arctic, making this contaminant of particular interest to the James Bay region of northern Ontario and Quebec, Canada. By analyzing PBDE body burden (plasma), this contaminant was characterized with regards to its latitudinal variation and concentration. The study established a baseline PBDE level in the communities of the James Bay region and determined concentrations in the traditional foods of the First Nation communities located in the Mushkegowuk Territory of sub-Arctic Canada, to examine potential routes of exposure. The PBDE body burden was found to be low in the Mushkegowuk communities when compared to more northern communities in Canada. Similarly, PBDE body burden in the US and southern Canada is higher than those of the James Bay region. The body burdens of the James Bay Cree are similar to Japanese and Swedish levels. Analysis of traditional foods shows relatively elevated levels of PBDEs in certain game species such as whitefish (Coregonus clupeaformis), mallard duck (Anas platyrhynchos), and moose (Alces alces) compared to other traditional foods from the same area. Data in this thesis can be used for human biomonitoring purposes and the animal data can be combined with consumption data in order to assess the contribution of PBDEs to body burden from a First Nation diet as well as provide guidance when developing safety guidelines for the consumption of traditional foods. While the sub-arctic has been identified as an environmental sink for PBDEs, the levels found in this study indicate that long-range transportation and dietary biomagnification of the contaminant may not be the primary exposure pathway. This may be due to low bioavailability of the contaminant, rapid metabolism, or alternate sources of exposure and should be investigated in future studies.