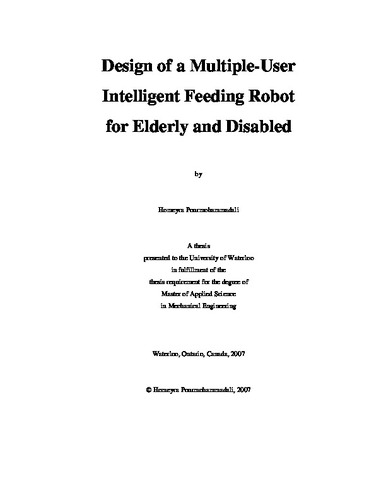 The number of elderly people around the world is growing rapidly. This has led to an increase in the number of people who are seeking assistance and adequate service either at home or in long-term- care institutions to successfully accomplish their daily activities. Responding to these needs has been a burden to the health care system in terms of labour and associated costs and has motivated research in developing alternative services using new technologies. Various intelligent, and non-intelligent, machines and robots have been developed to meet the needs of elderly and people with upper limb disabilities or dysfunctions in gaining independence in eating, which is one of the most frequent and time-consuming everyday tasks. However, in almost all cases, the proposed systems are designed only for the personal use of one individual and little effort to design a multiple-user feeding robot has been previously made. The feeding requirements of elderly in environments such as senior homes, where many elderly residents dine together at least three times per day, have not been extensively researched before. The aim of this research was to develop a machine to feed multiple elderly people based on their characteristics and feeding needs, as determined through observations at a nursing home. Observations of the elderly during meal times have revealed that almost 40% of the population was totally dependent on nurses or caregivers to be fed. Most of those remaining, suffered from hand tremors, joint pain or lack of hand muscle strength, which made utensil manipulation and coordination very difficult and the eating process both messy and lengthy. In addition, more than 43% of the elderly were very slow in eating because of chewing and swallowing problems and most of the rest were slow in scooping and directing utensils toward their mouths. Consequently, one nurse could only respond to a maximum of two diners simultaneously. In order to manage the needs of all elderly diners, they required the assistance of additional staff members. The limited time allocated for each meal and the daily progression of the seniors’ disabilities also made mealtime very challenging. Based on the caregivers’ opinion, many of the elderly in such environments can benefit from a machine capable of feeding multiple users simultaneously. Since eating is a slow procedure, the idle state of the robot during one user’s chewing and swallowing time can be allotted for feeding another person who is sitting at the same table. The observations and studies have resulted in the design of a food tray, and selection of an appropriate robot and applicable user interface. The proposed system uses a 6-DOF serial articulated robot in the center of a four-seat table along with a specifically designed food tray to feed one to four people. It employs a vision interface for food detection and recognition. Building the dynamic equations of the robotic system and simulation of the system were used to verify its dynamic behaviour before any prototyping and real-time testing.