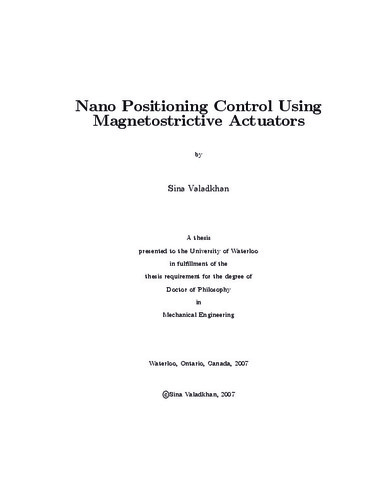 The focus of this thesis is on the development of control systems for nano- positioning actuators using magnetostrictive materials. Magnetostrictive materials have large strokes and fast responses. However, they are less commonly used than other smart materials such as piezoceramics due to their highly nonlinear and hysteretic behaviour. It is necessary to arrive at an accurate model which can predict the material response at any magnetic field and load condition. Furthermore, due to the nonlinearity of the material, a closed-loop feedback system with a stabilizing controller is needed. Different hysteresis models for magnetostrictive materials are implemented and compared. Since load-dependence is one of the main features of hysteresis for magnetostrictive materials, load-dependent models are studied. An existing load- dependent model is implemented and compared with a new load-dependent hysteresis model which is developed by energy considerations. Passivity of the magnetostrictive system was shown using a physical argument. The results are used to develop a stabilizing controller. Using the properties of the Preisach model, an alternative approach for controller design is proposed. Tracking properties and stability of the controllers were shown. An experimental setup has been developed for data collection and model and controller evaluation.