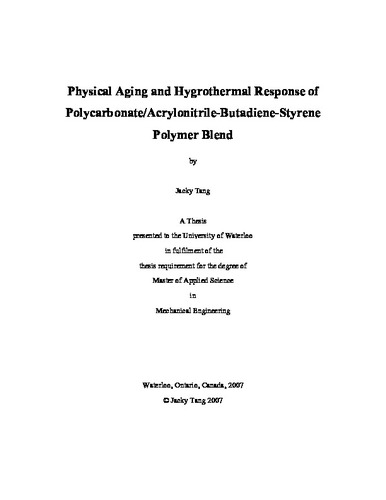 Polycarbonate (PC) is a glassy engineering thermoplastic that has been used for decades because of its superior mechanical properties such as high toughness and stiffness, and for its general thermal stability. However, the industrial demand for higher performance polymers with faster processing times has caused PC to be gradually replaced by different engineered polymer blends, such as polycarbonate/acyrlonitrile-butadiene-styrene (PC/ABS). Blends combine the advantages of the individual components but because they are a relatively new class of materials, their time-dependent behaviour is less well understood. The goal of the present work is to characterize two primary time-dependent processes in a commercial 75:25 PC:ABS blend that are known to affect the long-term mechanical properties of the individual components. The first is physical aging which is a result of non-equilibrium fast cooling of glassy or amorphous polymers. Physical aging is associated with structural relaxation due to enthalpic and volumetric recovery. The second process is hygrothermal conditioning which is the combined application of thermal aging and moisture absorption. Three sets of characterization tests were conducted using Differential Scanning Calorimetry (DSC) and Fourier Transform Infrared spectroscopy (FTIR). The enthalpic relaxation results determined from DSC data for aging at nine different combinations of time and temperature showed that aging experiments are best conducted at temperatures between 80 and 90°C. This range is below the glass temperature of the ABS component. The activation energy for enthalpic relaxation for the unaged blend was found to fall between energies for PC and ABS relaxations, but not according to the rule-of-mixtures. The present study attempted to adopt the Tool–Narayanaswamy-Moynihan (TNM) phenomenological model to predict relaxation kinetics but was found to be complicated by multiple endothermic peaks. It was then concluded that the TNM model, although very useful for single polymer systems, is unsuitable for blends. A semi-empirical model was applied instead to fit the experimental data which provided a reasonable estimate of the relaxation behaviour. Aging at 80°C for the period investigated did not reach equilibrium and it is expected that aging times of upwards of 2 years will be necessary to minimize the errors associated with the data fitting to provide a better fit of the model. The FTIR studies revealed that thermal aging at 80°C in dry atmosphere results in oxidation of the butadiene component. However, the addition of moisture to the aging process appears to prevent, or at least impede, oxidation from occurring. The presence of moisture seems to trigger hydrogen bonding, which saturates regardless of the moisture content after approximately 80 days. The initial rate of moisture diffusion in PC/ABS appeared to depend predominantly on temperature while the ambient moisture concentration tends to only affect the final equilibrium content in the blend.