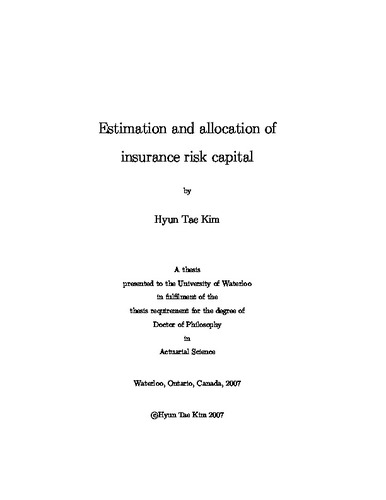 Estimating tail risk measures such as Value at Risk (VaR) and Conditional Tail Expectation (CTE) is a vital component in financial and actuarial risk management. The CTE is a preferred risk measure, due to coherence and a widespread acceptance in actuarial community. In particular we focus on the estimation of the CTE using both parametric and nonparametric approaches. In parametric case the conditional tail expectation and variance are analytically derived for the exponential distribution family and its transformed distributions. For small i.i.d. samples the exact bootstrap (EB) and the influence function are used as nonparametric methods in estimating the bias and the the variance of the empirical CTE. In particular, it is shown that the bias is corrected using the bootstrap for the CTE case. In variance estimation the influence function of the bootstrapped quantile is derived, and can be used to estimate the variance of any bootstrapped L-estimator without simulations, including the VaR and the CTE, via the nonparametric delta method. An industry model are provided by applying theoretical findings on the bias and the variance of the estimated CTE. Finally a new capital allocation method is proposed. Inspired by the allocation of the solvency exchange option by Sherris (2006), this method resembles the CTE allocation in its form and properties, but has its own unique features, such as managerbased decomposition. Through a numerical example the proposed allocation is shown to fail the no undercut axiom, but we argue that this axiom may not be aligned with the economic reality.