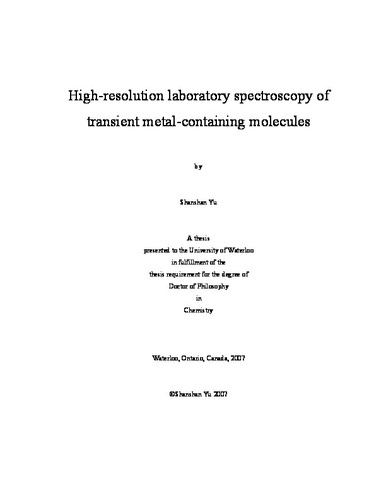 Ten gaseous transient metal-containing molecules have been synthesized and studied by high resolution spectroscopy. Transient molecules are molecules with a short lifetime, and they play an important role in chemistry because they are reaction intermediates. One of the difficulties faced in studying transient molecules is their typically low concentrations under laboratory conditions. Three types of sources were used to generate these molecules: 1) an emission source that combines a high temperature furnace with an electrical discharge was used to generate SbH, SbD, TeH, TeD, CdH2, CdD2, HZnCl and BeF2; 2) a King furnace (carbon tube furnace) was used to synthesize CoS; 3) a Broida-type oven (metal flow reactor) was used to generate SrOD. Two spectroscopic techniques were employed to study these molecules: 1) Fourier transform infrared emission spectroscopy was used to study SbH, SbD, TeH, TeD, CdH2, CdD2, HZnCl, BeF2, and CoS. 2) Laser-induced fluorescence spectroscopy was employed to study SrOD. One or two lasers were used to excite the SrOD molecules from the ground state to excited electronic states and then these SrOD molecules relaxed back to the ground state by emitting fluorescence, which was detected by a photomultiplier tube. Significantly-improved spectroscopic constants have been obtained for SbH, SbD, TeH and TeD. For SbH and SbD, the infrared X 3– vibration-rotation bands and the near infrared b 1+ – X 3– transition were observed and rotationally analyzed, and a Hund’s case (a) fit was performed for each of the four observed SbH isotopologues. For TeH and TeD, the X 23/2 vibration-rotation bands and the near infrared X 21/2– X 23/2 transition have been observed and rotationally analyzed, and Hund’s case (a) and case (c) fits were performed for each of the ten observed TeH isotopologues. New spectroscopic constants were obtained for HZnCl, CdH2 and CdD2. These three molecules have been successfully generated in the gas phase for the first time. The fundamental band and one hot band were obtained for the H–Zn stretching mode (1) and for the antisymmetric stretching mode (3) of CdH2 and CdD2. A least-squares fit was performed for each of the four observed HZnCl isotopologues and the twelve observed CdH2 isotopologues For the first time, a complete set of molecular constants for all three vibrational frequencies was experimentally determined for BeF2. Thirteen new hot bands were rotationally analyzed and the 1, 2, and3 vibrational frequencies were directly determined by fitting nineteen bands together. The traditional equilibrium vibrational and rotational constants were obtained for BeF2 by simultaneously fitting the observed vibrational term values and B rotational constants. New spectroscopic constants were obtained for two electronic states of CoS and SrOD, respectively. The A 4i – X 4i and B 4i – X 4i transitions of CoS and the and transitions of SrOD were observed for the first time. Hund’s case (c) fits were performed for the CoS transitions and Hund’s case (a) fits were performed for the SrOD transitions.