Evaluation of Geochemical and Reactivity Changes of Different Iron Materials 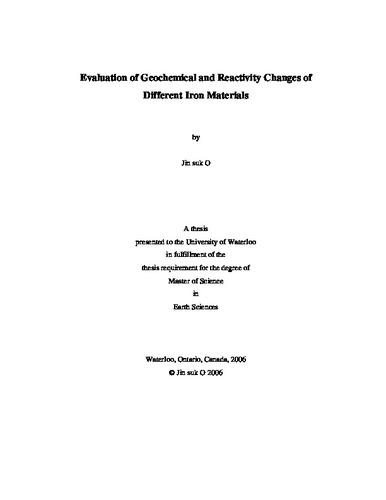 Previous studies have suggested that iron PRBs, receiving high concentrations of inorganic constituents in groundwater, may experience passivation because of the accumulation of inorganic precipitates. In an iron PRB containing more highly reactive material, even though the initial contaminant removal rate is faster than for less reactive material, a faster migration of the contaminant removal front may occur due to the greater reactivity loss, caused by faster accumulation of secondary precipitates. In contrast, an iron PRB containing less reactive material may show a slower accumulation of precipitates, and thus will show a slower migration of the contaminant removal front over time. Thus, it is hypothesized that an iron material having moderate initial reactivity may be more advantageous than material having a higher reactivity in terms of long-term performance. The objective of this study was to test this hypothesis by evaluating the changes of the reactivities of different iron materials in the presence of dissolved CaCO<sub>3</sub>. <br /><br /> Four different iron materials (Connelly, G-M, Ispat and Peerless) were selected for the column experiments. The changes in reactivities of the iron and formation of secondary precipitates over time were assessed, primarily by the iron corrosion rates, calculated from the hydrogen gas generation rates, by the cis-DCE removal rates and by the alkalinity profiles. The accumulation of precipitates in the four columns caused passivation of the iron. The passivation of the iron in turn resulted in migration of the mineral precipitation fronts as well as profiles of cis-DCE, TCE, VC, alkalinity, Eh, pH, and chloride. Connelly and G-M had longer periods of operation than Ispat and Peerless and thus their performance was the primary test of the hypothesis. G-M iron, which had the higher initial corrosion rate, compared to Connelly, showed a faster accumulation of precipitates near the influent end. The difference in accumulated precipitates resulted in a difference in the leading edge of the organic profiles and a significant difference in the pattern of passivation, indicating a faster passivation in the region near the influent end for G-M. <br /><br /> Model simulations were performed using the same fitting parameters but with different initial corrosion rate constants to further test the hypothesis. The model provided a reasonable representation of changing reactivities of the columns, being consistent with the observed data. In the simulation for long-term prediction, the cases of higher corrosion rates showed earlier breakthroughs and steeper curves than those of lower corrosion rates. Also, the predictions showed greater porosity loss for the case of higher corrosion rate. Thus, long-term predictions support the hypothesis. Accurate determination of model parameters such as cis-DCE degradation rate constants and iron corrosion rates are required for better predictions of long-term performance.