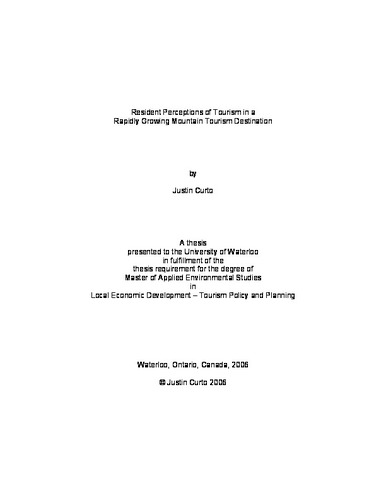 It is generally agreed that tourism results in both positive and negative impacts for residents of tourism destinations. There is a need to study resident perceptions of tourism because local residents are the ones who are most directly affected by tourism (Haywood, 2000; Simmons, 1994; Snaith and Haley, 1999). The study of resident perceptions is also valuable in that it can illuminate the views of those whose views are not otherwise heard. Several dozen studies have examined residents' perceptions of tourism and the vast majority of these studies have been rooted in positivism and apply quantitative methods. Recently a growing body of research has emerged which examine residents' perceptions of tourism from a qualitative research approach. <br /><br /> The intent of this study is to determine residents' perceptions of tourism in a rapidly growing mountain tourism destination. The Collingwood region of Ontario was used as the case study for this research. Specifically, this study examines residents' views on the current rate of growth, the costs and benefits of tourism, tourism as an economic development strategy, and the theoretical frameworks which might help to explain tourism in the Collingwood region. <br /><br /> This study is based on three research approaches which include qualitative inquiry, grounded theory, and explanatory case study research. Triangulation of data sources was used to examine the case from multiple perspectives and include a qualitative content analysis of the local newspaper, semi-structured interviews with residents and semi-structured key informant interviews. This data was analyzed using the constant comparative method. <br /><br /> The analysis resulted in the emergence of four major themes including growth, economic, political, and environmental. Growth was the dominant theme discussed by residents and some of the prevalent sub-themes include the lack of affordable housing, infrastructure problems, residential development, and new amenities and services. Some of the sub-themes include the economic benefits of tourism and economic development. Residents' vision for the future and their views on the Collingwood town council are political sub-themes discussed. The two significant environment issues which emerged were concerns over a new resort and housing development and the rapid rate of golf course development. Additionally, residents were asked what types of tourism they consider desirable and the two dominant forms which surfaced were nature/ecotourism and cultural tourism. <br /><br /> The analysis of the findings revealed that residents interviewed view tourism as one component of a larger system of growth and development within the Collingwood region. It was also revealed that most residents were more concerned about the rate and scale of development rather than the type of growth occurring in the Collingwood region. Furthermore, residents' recognize the complex nature of tourism impacts, and identify several indirect and induced impacts which result from tourism. This analysis also revealed that the lack of affordable housing within the region impacts both permanent residents and seasonal migrant workers. Two theoretical frameworks which were examined in relation to tourism in the Collingwood region include chaos systems theory and growth machine theory. <br /><br /> Three recommendations resulted from the research and include the creation of a tourism and urban growth policy and planning committee, a comprehensive affordable housing strategy, and the targeting of small and mid-sized business development.